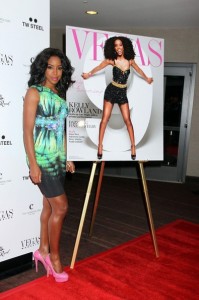 The 31-year-old singer took a break from Blue Ivyâ€™s nursery to praise her sisters with voices in her cover story.

â€œDestinyâ€™s Child was a huge part of my career, and I think itâ€™s only natural for people to refer to Destinyâ€™s Child when referring to any of us. For people to call us one of the greatest female groups of all timeâ€”are you kidding me? BeyoncÃ© and Michelle are two incredible women and deeper than what the public sees,â€ she tells the magazine.

â€œDestinyâ€™s Child, to me, was a sisterhood and a kinship that the three of us shared. You want people to respect that you have your own identity as an artist, but they also remember how they met you.â€