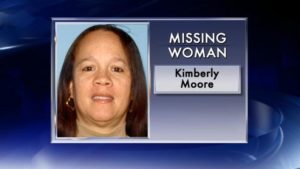 DeKalb County police are searching for a woman they said they believed was kidnapped from her house.

Police tell Channel 2’s Audrey Washington police found the woman’s house on Maplewood Drive was ransacked with both the back and front doors open.

The woman was nowhere to be found.

Her daughter, a former star on the TV show Love and Hip-Hop Atlanta, said she wants her mother returned safe.

Washington saw several detectives go in and out of the house, as well as crime scene investigators speaking with family members, Thursday morning.

Investigators said the woman is identified as Kimberly Moore, 54. She was reported missing shortly before 8 p.m. Wednesday.

“We brought in aerial support here. We attempted an aerial search. We also brought in the K-9 unit to track, but we were unsuccessful,” DeKalb County Police Major Stephen Fore said.

Have you seen Kimberly Moore? DeKalb County Police say she was kidnapped from her home. I’ll have the latest on the search, at 4:30. @wsbtv pic.twitter.com/lLMyxaaYiD

Right Now: DeKalb Police searching for woman, they say was kidnapped from her home. Details from investigators, beginning at 4:30. @wsbtv pic.twitter.com/vTSKNUV068

If you know anything please help bring her home safe ??

Born and raised in Atlanta, Georgia, SSX PESO decided to get into the music industry after coming home from a 24-month stretch in February...
Read more
Videos