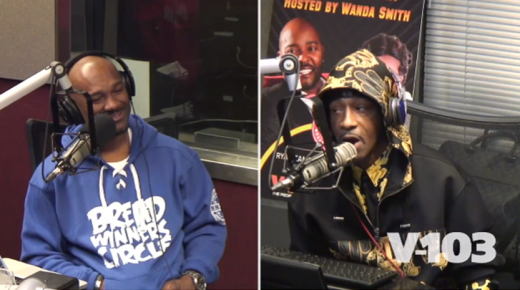 Check out the video and commentary below.

“For the first time in my life. I am offering “back-to-back apologies.”

Katt Williams apologized to fellow comedian/actor Kevin Hart on The Big Tigger Show on V-103 in Atlanta – his first comments to the media since his series of misfortunate events after his headlining performance this past weekend at Philips Arena.

Katt arrrived at the station unexpectedly – started the interview admitting to having “aimed inconsistently” when he accused Big Tigger – a friend who he kicks it will  – of saying that Williams had been “at a pool place buying chemicals for drugs”.

“I do not tolerate betrayals in my friendships. It can be treacherous out there, so you have to deal with it when it comes.”

Williams is mired in legal issues at the moment, and personal ones; referring to Hart as a puppet at his “Conspiracy Theory” show at Philips Arena, and afterwards issuing a $5 million challenge to Hart on social media.

He was apologetic about those comments with Big Tigger. Sharing,

“I should have never mentioned Kevin Hart’s name, he is the reigning King of Comedy.”

But after the lengthy apology to Kevin Hart, Williams then took aim at Chris Rock, who he referred to as “Stepin Fetchit Cool Number One.”

When asked what’s the issue with Chris Rock,

“I’ll acknowledge that when I get to it. I’ve already made enough missteps.”

It takes a big man to apologize. Check out the video below.