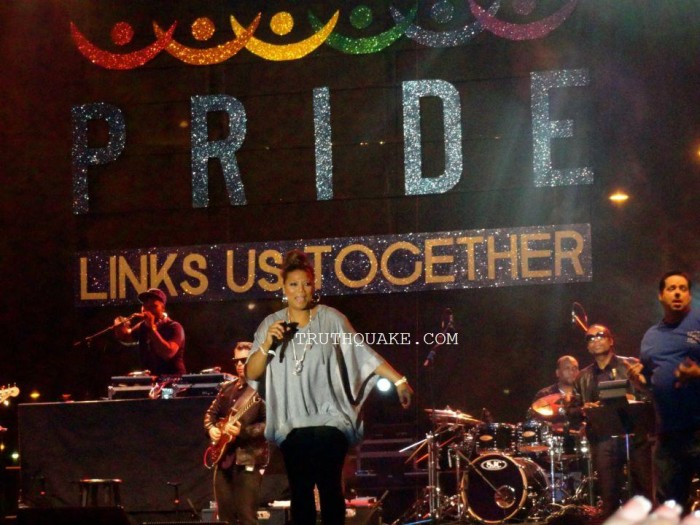 Queen Latifah Â publicly denied that her Â May 19th performance at Long Beachâ€™s Lesbian & Gay Pride event was her “coming out.” Deets inside….

YBF report Queen Latifah performed at the 2012 Long Beach Lesbian & Gay Pride Event. And , of course, folks around the net assumed this was her way of “coming out of the closet.” Now, she’s addressing the rumors that she “came out” during her performance. She told Entertainment Weekly,

â€œThat definitely wasnâ€™t the case. Iâ€™ve never dealt with the question of my personal life in public. Itâ€™s just not gonna happen.â€

But don’t take Queen’s statement as a diss to the LGBT community. She continued,

â€œTo me, doing a gay pride show is one of the most fun things. My first show that paid more than $10,000 was in a gay club on New Yearâ€™s Eve in San Francisco. Tupac happened to be in town, so he came to kick it with me. This was the early â€™90s. And the boys were like, â€˜Take your shirt off, Tupac!â€™ He wasnâ€™t doing that. But we had a blast in there.â€

Queen also addressed the bullying that many people in the community experience, saying,

â€œI know that the most important thing and the only thing I have to give is love. When people are going through hatred and bullying, the biggest thing to fight that is love. So thatâ€™s all I encouraged my audience to do that night: to share their light and share their love. Period.â€