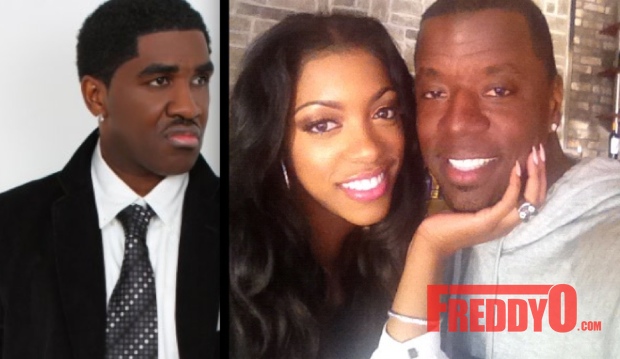 Ralo Wonder has been accused of being the reason for Porsha Stewart’s pending divorce to Kordell Stewart. Wonder has now released a statement that addresses these allegations.

Check out the statement after the details.

Check out the full statement from Ralo Wonder below:

“Me Porsha never had an Intimate relationship let’s clear that up first!! It was all business no pleasure. Second I didn’t release them fake text messages!! What happened was we started a record label and we were looking for a female artist so after looking at a bunch of people we chose Porsha once we found out she supposedly could sing!! I Chose Her!!

I looked at it as, she’s already on a hit show and she’s a pretty girl so that’s half the Work!! She already had a good platform to launch from!! All the people I had helping me with the label didn’t believe in her!! Any way I put together a half million-dollar budget and put my partner on the project Steve Lucas who is a 20 year vet and had managed JODECI, MARY, PUFF, AKON etc.!!

He got in contact with her and met with her, he offered her a deal and she was interested. I never wanted to meet her!! He was going back and forth with her and when we would be going over all the projects we were doing, I would ask him what was the status on the situation!! He would be unsure because it was hard to deal with her because of how Kordell was controlling her!! Sometimes she would make it to meetings sometimes she wouldn’t!! So I told Steve don’t worry about it and that the marriage is not going to last!! So just get her signed and as soon as they announce on TV they’re getting a divorce, be ready to put a record out and capitalize off all the media and it would be a hit over night!!

So some time went past!! Steve called me one day and said Ralo you were right they just announce that there getting a divorce!! I said reach out to her and see if she’s ok!! When he reached out to her she said she was O.K.!! She just needed a couple of things!! Some Money and her own place!! Her Advance on her contract was 50K, so that was some money for her right there and then. We hooked her up with a realty agent to find her a place with a budget of 5K a month, then she found something for 10K so Steve said hold on I have to ask the CEO of the Label Wonderboy!! So I said OK!! So she said who is that 9Wonderboy). She then went out with the realty Agent who had mentioned my name to her and that’s how she got introduce to me!! The next morning we spoke, and after we spoke I told her to stay in contact with Steve and she went Crazy!! She said NO, NOOO!! NO!!!!! I want to be in contact with you, so I said OK!! So we had everything set up for her and now it was time to hit the studio to see what she can do. She said OK!! I said I see you when you come to New York to record!! She said OK!! I’m sooo excited I can’t wait!! I asked her if she practiced the song we sent her and she said yeah!! I love it so much it made my MOM cry etc… We get to New York and she doesn’t want to record!! Set the studio time up twice she didn’t want to do it!! She was like oh I just need to rest my voice and clear my head!! I said OK, but she wanted to do all kinds of other stuff. Then we get back to Atlanta and she doesn’t want to record again but she wants to do all this other stuff, do on vacations and look at houses, so I said something isn’t right!!

Then somebody real close to her told us Porsha couldn’t really sing. I was like nah we have a demo on her she sounds good. They said OK you ready to go in the Studio!! She said wait, hold on, let me call somebody. So I said to myself this is Some BS!! This Girl doesn’t want to sing and I basically put the situation on hold until we knew if she could really sing and that was it!!

Afterwards, every time I would bring up going to the Studio she would change the subject and she started spiraling out of Control. She would say “the Media is everywhere I can’t take it, I want to got here, I want to go there, I want to go here” She started acting like she was Beyonce getting divorced from Jay Z.

I talked to her and calmed her down!! The next day she said thanks for everything and beating me back into shape. We kept in touch and every week and she would say she’s going to be ready to record but she never was. After a while the plan we had to break the first song for her lingered on to long and we felt the window had closed and that was it!!

There are no hard feelings, and I certainly wish Porsha the best in all her endeavors!!”

Wow….This is a quite interesting statement.

What do you think about Ralo Wonder’s statement?