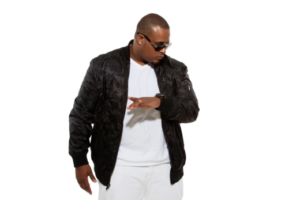 Ricco Barrino was born in High Point, NC. His music career began when he started singing at the Oak Grove Missionary Baptist Church, where he learned how to lead the choir by his family members.
Good for his compositions, lyrics and soulful sound he can capture an audience of all who is under the influence of his melodies. With Ricco Barrino’s ability to mix old school and new school together it’s quite genius how he’s able to reach across generations making for some good ole bowl of “Gumbo Fans”. As Ricco Barrino captivates his audience with his smooth deliver of word choices and sweet melodies. You can easily see why his music sounds like the likes of “Rock Soul”.

In 2007 when Ricco Barrino released his debut single, “Bubble Gum”, it landed him a recording deal with TI’s Grand Hustle Records in 2008. As Ricco Barrino career started to take flight he recorded numerous songs including “Pray For Me” and “Hood” a duet with his famous sibling and American Idol Winner Fantasia. Familiar favorites like “California” exceeded expectations and received credits for the Oscar nominated film, “The Butler”. Other features include five songs in rotation on mainstream radio including “California” (Colonel Loud ft. Young Dolph x TI), “Come to the Money” (T.Neal ft. Ricco Barrino x Colonel Loud), “No Ratchets” (Colonel Loud ft. Ricco Barrino), “Pray for Me” (Ricco Barrino), and “Vibe” (Ricco Bar.

Ricco Barrino is debuting his Newly Released single “Baby” Feat. Pretty Rickey, Trey Songz, Rico Love and more. You can also checkout Ricco Barrino’s sizzling Hot New Song “Baby” on Youtube: What can we expect from him, well there is much more to come from this multi talented artist that is sure to bring out old and new fans back to good music. As he continues to reach the top Ricco Barrino is open ready for some heavy hittas to collab with his edgy verses, catchy hooks and guest appearances as he reaches the next level.