Porsha is at home working on her “baby-nup” on her computer. Do we think she downloaded a template from Legal Zoom or is just freestyling this document? Porsha and Todd have been sending each other pictures of what their baby might look like. In other words, Porsha and Todd are pretending that they’re ready for a baby because they’re blending their faces in an iPhone app and sending it back and forth. Porsha calls Phaedra to check if this document would hold up in court and Phaedra tells Porsha that having a baby will make her vagina look like a hot dog bun.

Kenya is at home when her cousin Che comes to visit, so they sit and watch a montage of their relationship before Che asks Kenya about the Hawaii trip. Kenya says that she thought her relationship with Phaedra was in a good place until it all fell apart in Hawaii. Kenya also tries to take some accountability for her relationship with Matt falling apart, which is a good step, but she says she didn’t give Matt the attention he wanted and that made him feel emasculated. Kenya has bought into some very strange and patriarchal thinking about relationships. If your relationship is built on giving the other person unlimited attention or else they feel “emasculated,” that’s not really your fault.

Kandi heads over to Mama Joyce’s house to give her some updates about the trip and about the OLG restaurant. Todd says that most businesses don’t start making money for the first few years, so no one should expect anything anytime soon. Kandi proposes a friends and family night before the restaurant opens to continue the progress. Meanwhile, nine-month-old Ace eats an entire chicken leg! 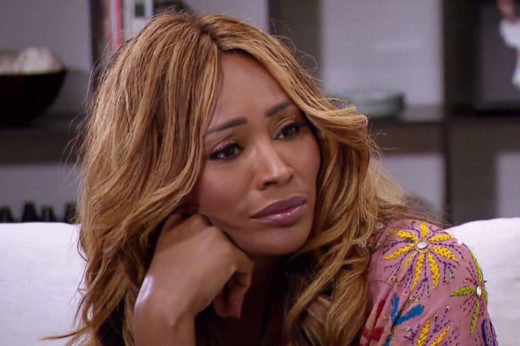 Phaedra and Cynthia sit down and when they watch their montage of the last time they visited each other, they are almost unrecognizable. These two don’t really spend time together. Cynthia asks Phaedra if her divorce is really final and Phaedra tries to dodge the question, but she ultimately reveals that the divorce is finalized. Phaedra calls Kenya “short-sighted, insensitive, and possibly evil” for throwing that party. Cynthia just wants everyone to get along because Phaedra was the one talking about rejuvenation and restoration.

Porsha tries to show Todd her baby-nup and it goes about as well as expected. She put on a sexy dress to distract him because that’s how you want someone to enter a legal contract. The terms in the contract are amazing: The father is responsible for 50 percent of all expenses, education, and entertainment for the child. The mother has complete decision-making power, can take the baby outside of the country without giving the father notice, and can put the baby on whatever form of media she wants. (“I wanna put the baby on Instagram,” Porsha says.) Also, there’s something in there about at least 25 percent of the father’s income has to go to the baby. The best part is she thinks this is reasonable. Todd immediately objects and wants the whole thing to be redlined. She’s not wrong that having a plan is great, but not when the entire plan is having the father give up a huge chunk of his income. Todd leaves and says if that means they can’t be together, it’s everyone’s loss.

It’s time for Cynthia’s fashion show and Kairo is late. Sheree thinks he left the house and isn’t really concerned. Kairo strolls in 45 minutes before the show even though he was supposed to be there an hour and 15 minutes earlier. Sheree shows up to take her seat and complain about the lack of air conditioning. Cynthia’s business partner throws a little shade her way and Cynthia says, “He was only 10 minutes late!” Sheree has a completely altered sense of time that allows her to excuse her son’s unprofessionalism and demand two backpacks. There’s the slightest bit of drama when Phaedra introduces Johnnie to an employment lawyer to prepare to sue Kandi. His accusation is that Kandi stole a bunch of his ideas, like “write a play” or “open a restaurant.”

Kenya decides to take her puppies shopping for their birthday and decides to invite Matt along because he’s the puppy’s father. Kenya. This man is not the dog’s “father.” He’s your abusive ex-boyfriend who turns every moment into chaos. Matt starts the same old drama again, and Kenya needs to stop coming up with cute and impulsive reasons to involve Matt in her life. This isn’t someone you can be friends with.