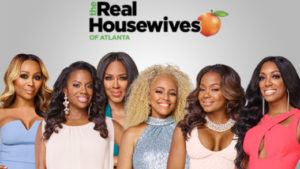 The drama we left off with last week will take a bit longer to boil. That way, when it unavoidably gets brought up again, each of the ladies will really feel the sting of festering anger. Kandi and Porsha’s beef, which supposedly stemmed from the Kandi-Phaedra feud, will seemingly make a comeback sometime in the future; however, this week is all about Cynthia reconnecting with Peter and Kandi dealing with even more drama in her inner circle. We even get a surprise visit from boyfriend, Matt.

To start off, Kenya and Cynthia meet up to take their babies for a walk, and no, we’re not talking about kids — it’s all about the puppies. In the midst of having to watch Kenya lick her dog’s tongue, Cynthia learns some startling news involving her soon-to-be ex-husband: Peter invited Kenya to be the hostess for his new Bar One club opening. And Cynthia had no idea. “I’m glad you told me,” she says to an otherwise oblivious Kenya. Apparently, Miss “Gone with the Wind Fabulous” didn’t see how it would be a problem to go without telling Cynthia; she even invites her to tag along as a guest. If this says anything at all, it’s that Peter will not completely leave Cynthia’s life without taking some of Cynthia’s precious friends with him.

Backstabbing and asking for what isn’t rightfully owed seems to be common behavior in the ATL, as Kandi has to deal with a disgruntled ex-employee and “friend” of the Kandi Coated Nights gang. Her ex-assistant and event planner, Johnnie, was let go a few weeks prior for not giving his full attention to her business, but as far as Kandi knew, he understood the circumstances and left on a peaceful note.

Well, a social media post from the man throws that idea out the window: Johnnie called out Kandi on Instagram for being “fake.” Kandi gives Todd the lowdown on the assistant drama, unsure of how to deal with the passive-aggressive, attention-seeking post. Her bigger fish to fry with Porsha gets brought up, too, but Todd shoots that down pretty quickly and tells Kandi to focus on her businesses instead of what Porsha thinks of her.

It’s a good thing for Kandi her frenemy is too busy setting up a new chapter in life to come for her again. Porsha is finally forced to move out of her old house, putting the crib on the market for a new home and fresh start. It’s not that she disliked her current home; she just needed to take on a new space that reflected the new, nonviolent woman she wants others to believe she is. We learn this via a scene of her packing up the kitchen. Apparently, her mother had helped the night before but left out a whole bottle of spray whipped cream. Why there was a fresh bottle there, no one knows, but Porsha decides to just throw the rest of her kitchenware into a box and head for the hills and greener pastures.

In her own form of reinvention, Shereé reveals that during the time her chateau was getting made — so, like, three years ago — she was also working on her first novel. Originally intended as a memoir, Shereé took the idea a bit further, turning her real-life stories into greater dramatized moments featuring fictional characters. So far there’s only one book, but according to the meeting she has with an overly complimentary publisher, it looks like a whole series of dramatic novels could be coming from Shereé. Move over, Sweet Valley High, She by Shereé is ready to tell her tales of the Atlanta elite getting down and dirty.