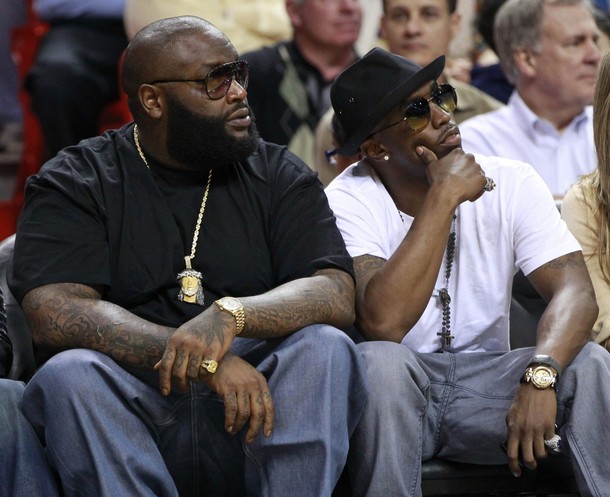 While DJ Kool Herc Battles Health Rapper Rick Ross celebrated his 35th birthday in his hometown of Miami at King of Diamonds strip club this past weekend. Recession proof? Must be, as sources say the rapper made it thunderstorm shelling out $1 million bucks at the strip club with celebrity friends Diddy, Pharrell Williams, Busta Rhymes, and many more. Video footage hit the net last night of the events festivities captured by a Peter Bailey of NBC Miami. Here’s the video tell me what you think?

The endless spending just so happen to fall on the same weekend where legendary DJ Kool Herc was hospitalized and in need of a serious life threatening operation, but doesn’t have any health insurance. Fans circulated tweets on Twitter asking for donations for the man they call the Godfather of Hip Hop, including tweets to Diddy and Rick Ross being asked could they pay for Kool Herc’s medical expenses, since it was reported Diddy purchased his son another Mayback and Rick Ross blowing millions in the strip club. On a Kre-Note, as I said before one should not dictate or judge how one chooses to spend their own money and who says Diddy and Rick Ross didn’t contribute in some shape or form. Russell Simmons retweeted the circulating tweet regarding Kool Herc’s health and also tweeted that he donated. Today it was reported that DJ Kool Herc has been going back and forth with St. Barnabas Hospital in the Bronx since October and was stated he needed to pay a deposit but a figure was never discussed, which is the issue says his sister, Cindy Campbell.