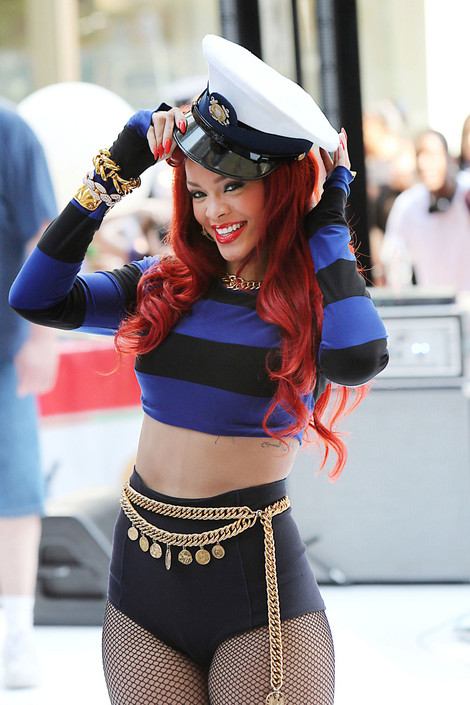 Rihanna took a break from rehersing for her LOUD tour to call in to 106 & Park to address all of the scrutiny she has been recieving behind the Man Down video. Read the Full Interview Below and tell me what you think!

On the Creative Concept:

â€œI donâ€™t like to make videos, I love to make an experience, and this is art with a message. This time around I wanted to explore and experiment a little bit with my acting even more than I have ever before. And I knew that only Anthony Mandler would be able to master this particular project for me. We work together on almost all of my videos and thereâ€™s a certain level of trust that goes into making a video like this one, like a mini-movie. Never play it safe, not here, ever. [laughs] We always push each other further and further out of the box. Itâ€™s gotta be deeper, itâ€™s gotta be clever, itâ€™s gotta be more twisted.

â€˜Man Downâ€™ is a song about a girl who has committed a murder that she regrets, and is completely remorseful about. You hear her crying to her mama, saying why she did it, [that it] couldâ€™ve been somebodyâ€™s son, she didnâ€™t mean to hurt him. Making that into a mini-movie or video, we needed to go back to why it happened. Obviously sheâ€™s not a cold-blooded killer. It had to be something so offensive, and we decided to hone in on a very serious matter that people are afraid to address. Especially if youâ€™ve been victimized in this scenario. Rapeâ€¦unfortunately itâ€™s happening all over the world and right in our own homes. We continue to cover it up and pretend like it doesnâ€™t happen. Girls and boys feel compelled to be embarrassed about it and hide it from everyone, including their teachers, their parents, and their friends. That only continues to empower the abusers.

I personally donâ€™t condone violence or murder at all. Iâ€™ve been abused in the past and you donâ€™t see me running around killing people in my spare time. [chuckles] I just want girls to be careful. I want..you know, have fun, be flirtatious, be sassy, be innocent and sweet. Be everything that you are, but just try not to be naive. And thatâ€™s not coming from a parent but a peer. Iâ€™m one of you guys and as much as you donâ€™t want to believe it, we go through the same stuff. Donâ€™t be afraid to talk about it.â€

â€œI didnâ€™t go into it to make a controversial video. I wanted to make a mini-movie, something raw and artistic. If I can be a voice for so many that arenâ€™t heard, then I win twice. Look at how itâ€™s effecting people. Girls are empowered by this. Itâ€™s easy to turn it to something negative but Iâ€™m just really impressed that my fans â€˜get it.â€™ That was really important to me.â€

Check Out the Interview Below: