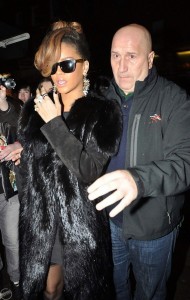 Rihanna is making history this week on the other side of the Atlantic. According to the Official Charts Company, the pop diva’s album “Talk That Talk” and its lead single “We Found Love” have both reached number one on the U.K. charts.

Back in January, “Loud” and its single “What’s My Name” also landed at number one in the same week.

The last artist to achieve the feat was T-Rex, who’s “Electric Warrior” LP and “Telegram Sam” single went to number one in 1972, followed three months later by “Bolan Boogie” and “Metal Guru.”

However, Rihanna is unlikely to see quite as much success stateside. Billboard predicts “Talk That Talk” will bow this week somewhere behind Michael BublÃ©’s “Christmas” album and Nickelback’s new release, “Here and Now.” “We Found Love,” however, is still currently number one on the Billboard Hot 100 singles chart.

Just so yall know Rihanna has just reached 10 million followers on her Twitter account! She is the 8th person to reach that number in the popular social service! Sheâ€™s also close to reach 50 million Likes on Facebook!… WOW