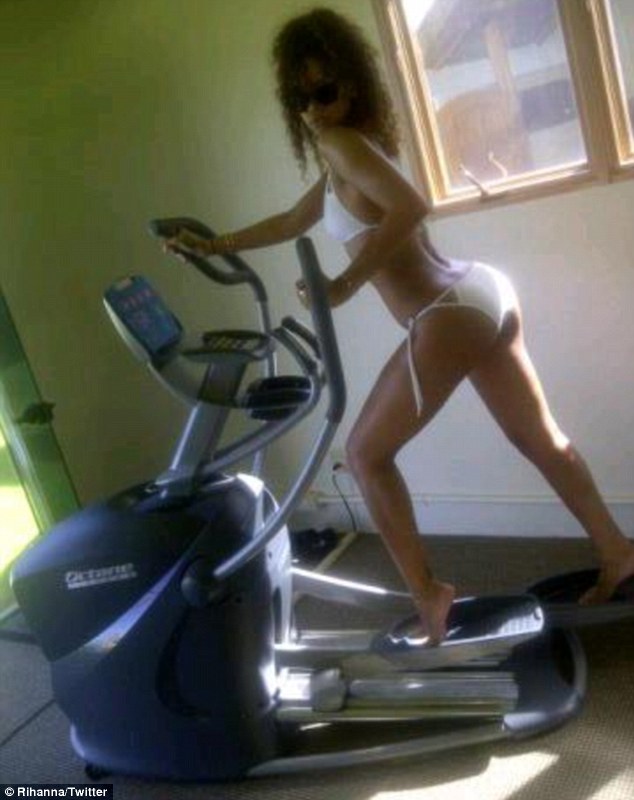 While most people prefer loose tracksuit pants and T-shirts for gym Â exercise, Rihanna appears to have different choices.Â  She recently shared a couple of pictures of herself in the gym in Hawaii where she’s on vacation.

The pictures show that she was only wearing a tiny white bikini posing on a cross trainer.Â  She wore triangle two-piece with a pair of huge sunglasses, something you’d expect on the beaches.Â  She tweeted this picture of herself saying “Ha ha, come tap this @Khloekardashian!!!

She also tweeted a couple of other shots that show her messing around with her friends in the hot bikini. When fans asked on twitter how she managed to look that hot, she tweeted, “Angles/Lighting/Photoshop 🙂 “

Check out all the photos she tweeted in the gallery below:

Did her amazing body amaze you? Let us know.

In other MTV news is reporting that Rihanna and Coldplay will perform live together for the first time on February 12 when they take the stage at the 54th annual Grammy Awards for the televised debut of their Mylo Xyloto collaboration, “Princess of China.”

Rihanna, nominated for four Grammys this year, broke the news on Twitter, writing, “My friends @ColdPlay and I will be sharing the stage for a performance at this years Annual Grammy Awards!” A short time later she added, “WE reached 2BILLION views on @youtube !!! THANK U!!! I’m in a great mood, and I got some GREAT NEWS!!!”