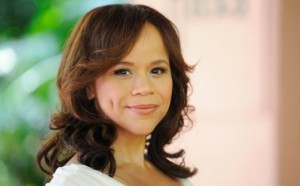 According to an exclusive report from Variety, actress/choreographer Rosie Perez is supposedly leaving the opinionated morning talk show “The View.” Perez had only joined the table of co-hosts four months ago, along with returning co-host Rosie O’Donnell and new co-host Nicolle Wallace.

The “Do The Right Thing” actress had not been on the show this month because of her appearance in Broadway’s “Fish In The Dark.” Variety‘s report also says that a show representative denied Perez’s alleged exit stating that “her status with the show has not changed.” However, it does appear that there may have been a few issues with Perez. Sources tell Variety that Perez never seemed to grasp “the show’s mixture of hard and soft news” and they claim that she had “trouble reading from a TelePrompTer.”

Furthermore, the overall show’s ratings had been in a steady decline since the beginning of this season. That decline could probably be mostly credited to the numerous on-air tangible tension moments and heated arguments between co-hosts Whoopi Goldberg and Rosie O’Donnell. I’m quite sure that viewers had grown quite tired of their daily debacles!

Honestly, this alleged departure by Perez isn’t really much of a surprise to me. What about you? Do you think Perez’s supposed exit is a good idea (IF the rumor is valid) or do you think that another of the co-hosts should leave? Sound off in the comments below!