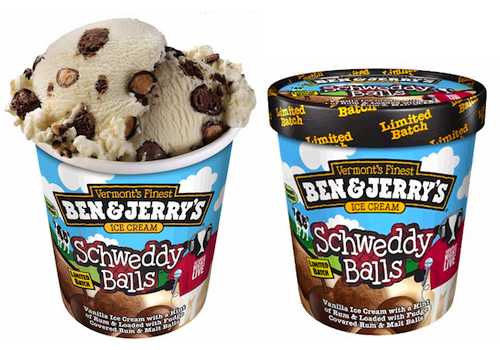 Ben & Jerry known for their delectable ice cream, have a new flavor “Schweddy Balls.” But not everyone seems too thrilled about the ice cream’s title. Many grocery stores have not been selling the new flavor all because it’s name. The ice cream which consists of fudge-covered rum balls, get’s the name from a 1998 skit. Alec Baldwin, who plays a baker named Pete Schweddy says, “No one can resist my Schweddy ball.”

“The name is nothing but locker room humor that’s not appropriate for young children. The vulgar new flavor has turned something as innocent as ice cream into something repulsive. Not exactly what you want a child asking for at the supermarket.”

Although the flavor is a limited edition, it’s become Ben & Jerry’s most popular limited-edition flavor. But stores not selling the ice cream may not be doing so because of the name. Some speculate some grocery stores may be supported of the One Million Moms group. The Mississippi-based organization of mom have been protesting the selling of “Schweddy Balls” since the release. Sounds like Ben & Jerry’s have a lot going on!

Would you eat this ice cream?