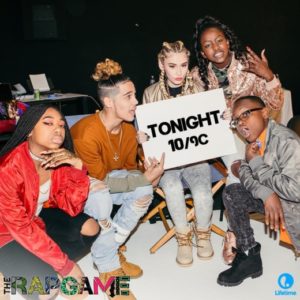 Breaking into the rap game is one of the trickiest paths to maneuver not just in music, but in life. For the past two seasons, Lifetime’s The Rap Game has highlighted the many aspects of this daunting, delirious process. And on January 13th, The Rap Game is back for an incredible third season that you won’t want to miss.

From Golden Globe winner and Grammy nominee Queen Latifah and Grammy winner Jermaine Dupri, The Rap Game’s third season will feature the best group of ambitious teen rappers yet. Hailing from the great cities of Atlanta, Baltimore, Nashville and more, there bold invigorating young rappers. According to complex they include:

Though he’s only 13, Roscoe already has a crazy entourage of people tending to his career. But he also has the chops to warrant it, as his first single, “All A Student,” is closing in on 100,00 views on YouTube.

A lot of great artists are discovered in unlikely places, and for Deetranada (a.k.a. Dee), that moment came during her 7th grade talent show. Since then, with the help of her brother Jermaine, Dee has been building up a presence in both the music scene and on social media, displaying a work ethic that is quite uncharacteristic for most 15-year-olds.

Dedicated, driven and confident, 16-year-old Nova is always trying to perfect his craft even further, while also trying to contend with his uncle and manager, Ekko, who most definitely shares his nephew’s drive.

The youngest of the lot, 12-year-old Flau’jae’s story might also be the most touching. Shortly before she was born, her father—who was an aspiring rapper himself, known as Camouflage—was murdered. Thanks to some of his friends, including Master P, his daughter’s potential to be an incredible rapper in her own right did not go unnoticed. Now, Flau’jae isn’t just trying to carve her own path in the business, but to honor her father in the process.

If you were a fan of The Rap Game’s second season, then Tally really needs no intro. Now back with a vengeance, Tally is looking to prove that she alone has what it takes to win at the rap game.

Be sure to mark your calendars, because The Rap Game begins Friday, January 13th at 10/9c, only on Lifetime.