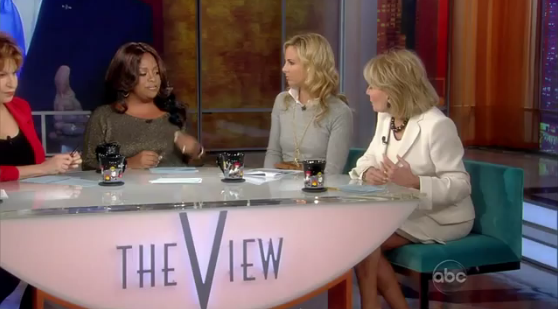 The ladies from The View are known for getting into some pretty controversial conversations. Therefore, it should come as no surprise that more drama has arisen amongst the ladies. On a recent show, Barbara Walters takes it upon herself to use the n-word after hearing co-host Whoopi Goldberg use the term. However, after Barbara Walters used the word, Sherri Shepard was sure to let her know that she wasn’t feeling it!

After Barbara Walters used the term, we see Sherri looking extra salty with her hands underneath her chin. Once she gets a chance to voice her opinions, she let Barbara Walters know what’s up!

Barbara then tried to apologize, but Sherri still shut her down and let it be known that Barbara would never understand where she was coming from anyway. Welp! Thank goodness Whoopi was there to take things back under control before they got messy.

Let’s get back to the issue at hand though. What’s up with presidential candidate Rick Perry belonging to a Texas hunting club that is located on property titled with the n-word? How do you feel about that? Do you think it was wrong for Sherri Shepard to sound off on Barbara Walters for using the term?