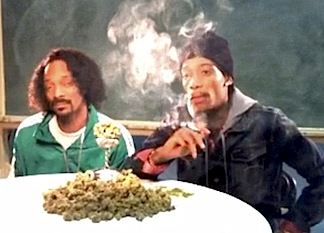 Snoop Dogg’s world of smoke has gottten him in a world of trouble!Lebanese concert promoter Roger Kalaouz is suing hip-hop star Snoop Dogg for $280,000 for smoking weed at a club in Beirut.

The Lebanese promoter is suing rapper Snoop Dogg for â€œtainting his reputationâ€ as a result of the smoking pot issue.

According to reports, Lebanese authorites are conducting a criminal investigation into the matter, which took place after a 2009 performance at Forum de Beirut.

The promoter says that the act was filmed and subsequently appeared in Snoopâ€™s â€œThatâ€™s Tha Homieâ€ video, from his album Malice in Wonderland. Kalaouz has threatened to take further legal action if he is not compensated $280,000, in addition to an agreement that Snoop perform two shows in the Middle East.
I dont think he’ll have a problem revisting the country. In a closing tribute to the warm welcome he had received in Lebanon, Snoop launched into a freestyle about Beirut during his August concert. â€œWhere do you go if you wanna hang with the Snoop? Beirut, Lebanon. Where do all the party people go to have a good time? Beirut, Lebanon,â€ he sang, urging the crowd to join in with the hook: â€œBeirut, Lebanon.â€