Snoop From ‘The Wire’ Pleads Guilty to Drug Charges 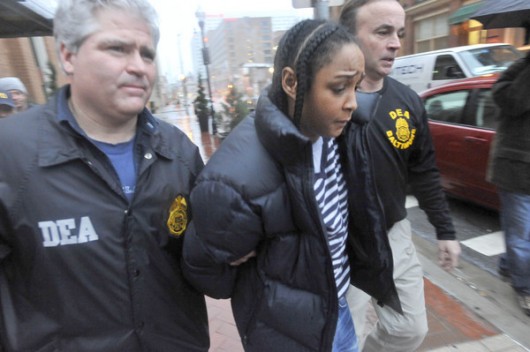 A day before her trial was set to begin, Felicia Pearson, AKA Snoop from The Wire, pleaded guilty to conspiracy to distribute heroin. The judge accepted the plea and suspended her 7-year sentence and ordered her to 3 years of supervised probation. She has been credited with time served and has will be allowed to travel out-of-state for work.

Snoop was caught up along with 64 other people in March sting “Operation Usual Suspects” and was indicted for bringing heroin from NY and marijuana from California and sold the drugs in Baltimore. According to the UK Telegrahph, her lawyer Benjamin C. Sutley said, “I can’t say that she would have been found not guilty,” Pearson interupts, “I would have been found not guilty.”
Interestingly enough, Snoop was caught on wiretap!! She was conspiring with two other people who had bought heroin from NY and sold them in Baltimore. Snoop was paid to store the drugs and money in her apartment.