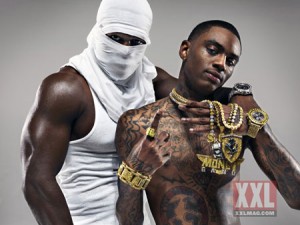 Â Soulja Boy says the man who used to manage his career took advantage of him financially when he was a teen.

According to TMZ, the rap star has filed court documents in Georgia Superior Court alleging that ex-manager Philip Ransom persuaded him to sign contracts that were “unconscionable, oppressive, and unjust.”

Soulja, who is now 21, claims that one of Ransom’s management deals will forever entitle him to five percent of Soulja’s income for work completed while Ransom was the manager.

A second contract reportedly gives 50 percent of all of Soulja Boy’s music copyrights to his label, which Soulja Boy says is “commercially unreasonable.” Ransom is denying the allegations, and has filed his own legal documents stating that Soulja Boy still owes him money.

Soulja Boy’s new lawsuit is just the latest bit of bad news to surround the rapper. It was reported in recent days that Soulja is facing eviction from his home in Atlanta. He was also arrested back in October on drug and weapons charges. Hope he works everything on top I could not imagine working everyday and have to pay people that don’t do anything 50%… wow what yall think?