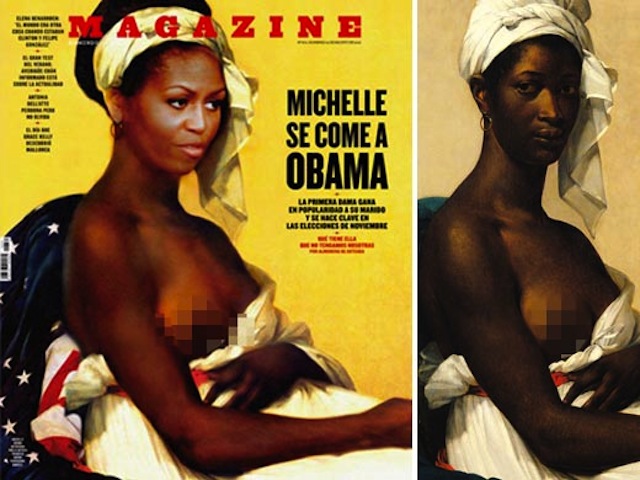 â€‹Michelle Obama has been portrayed in a many positive ways as first lady. However, Fuera de Serie, a Spanish magazine is probably the first to picture her as a 19th-century French slave. Magazine Fuera de Serie has stirred up controversy by photshopping the face of the first lady over an 1800 painting, “Portrait d’une nÃ©gresse”. The artwork depicts a female French slave in a white gown and head scarf, with one bared breast. The magazine Fuera de Serie praises Michelle Obama as the “gran mujer” (great woman) behind President Obama, but the image has sparked controversy

Fuera de Serie,Â has created an international uproar with its latest cover.

Read Below to see what the editor of the magazine had to say!

“I donâ€™t think the intention of the cover is to be racist, or to denigrate Mrs. Obama in any way. Fuera de Serie explains, that the author, â€œin order to understand the manner in which Michelle has seduced the American people, the journalist Pablo Scarpellini details the secrets of the woman who has not only conquered the heart of Barack Obama. The title is ‘Michelle: Granddaughter of a Slave, Lady of America,’ which suggests her as a powerful symbol of the American experience, though itâ€™s off by a couple of generations. The article itself may turn out to be less positive, but that kind of language doesnâ€™t indicate a desire to sell a vision of Michelle Obama as a slave.”

Apparently, the Spanish-language article praises the first ladyâ€™s accomplishments and deems her the â€œgran mujerâ€ (great lady) behind the American President.
What do you think.. Is this picture a form of art or disrespect?
Sound off…