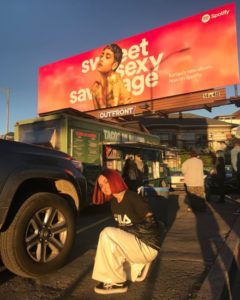 Kehlani’s rise to fame has been tumultuous to say the least. The 21-year-old Oakland native has been marred by some all-too-public, ugly relationship drama and an apparent suicide attempt. Add that to all of the ups and downs that com with being a young adult finding yourself, while all of the world watches on the screens of their phones, and you’d have to excuse her if her debut album SweetSexySavage was a little bit dour.

Except it’s not. Much like the vibrant cover, the album is full of bright hues. While she does talk her way through her plight and discusses her many insecurities and depressions, Atlantic Records at least provided her with plenty of lush, pillowy production as a backdrop to land on.

MY ALBUM JUST DROPPED EARLY. SWEETSEXYSAVAGE OUT EVERYWHERE NOW. I love you guys!!! Thank you for everything!!! Love to the team! Go get that thang! #SweetSexySavage see u on TOUR!

“I almost lost my mind / I left myself behind / I almost crashed and fell right through the sky” she says on top of an especially upbeat production on “Advice,” perfectly encompassing the liberating feel of the whole album. Yeah, at 21 Kehlani has made some mistakes and she’s got figuring some shit out, but she’s embracing all of the growth that comes with it.

In the end, SweetSexySavage sounds like every bit of a young woman discovering herself and enjoying the process no matter how painful it is at times.