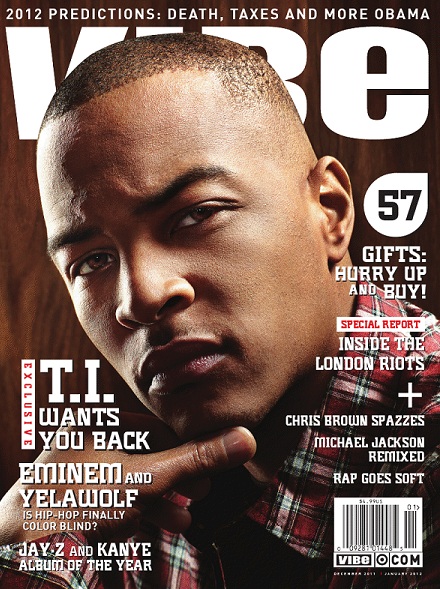 The King himself is the newest cover star for the December issue of VIBE magazine.Â He discusses a myriad of topics, including Osama Bin Laden, equal rights for Americans, and even responded to criticism about his wife Tiny.

Check out a few excerpts from the interview conducted by Bonsu Thompson after the cut check it out and tell me what you think?

T.I. on being skeptical of Bin Laden’s death

The conversation shifts from Muammar Gaddafiâ€™s deathâ€”which occurred five days priorâ€”to Osama Bin Ladenâ€™s assassination to both Eastern giantâ€™s once empowered relationship with the U.S. government. â€œItâ€™s like everybody that the U.S. was besties with, years later theyâ€™re the worst person in the world,â€ says Tip. “My question is what character traits do they possess now that they didnâ€™t possess when yâ€™all were besties? What made it go astray, and whoâ€™s to say they were on the dishonest end of that?â€

The politicâ€™n doesnâ€™t stop there. Before an article can be selected from the â€œOsama Bin Laden killedâ€ search, T.I. twists his lips in sarcastic fashion and shoots, â€œIf that really happened.â€

VIBE: Â So youâ€™re skeptical about the legitimacy of Osamaâ€™s death?
T.I.: Man, Iâ€™m a conspiracy theorist by nature. You canâ€™t experience the federal penal system and not be somewhat skeptical.

T.I. on all Americans having equal rights

Man, I will say this, the funniest joke I ever heard Tracy say during a stand-up was, â€˜Câ€™mon man, I think gay people are too sensitive. If you can take a dick, you can take a joke.â€™ [Cracks up laughing.] That shit was funny to me. And itâ€™s kind of true.â€™ While T.I. makes clear that he supports anyoneâ€™s sexual preference, he then connects, in his opinion, a current oversensitivity among gay people with a consequential and ironic offense of the First Amendment. â€œTheyâ€™re like,â€˜If you have an opinion against us, weâ€™re gonna shut you down.â€™ … Thatâ€™s not American. If youâ€™re gay you should have the right to be gay in peace, and if youâ€™re against it you should have the right to be against it in peace.â€™

T.I. on people criticizing Tiny for not taking the drug charge

â€œIâ€™ma tell you, 50 Cent and anybody else, we not gonnâ€™a Â have no discussion about what my ole lady shouldâ€™a, wouldâ€™a, couda done for anything as it pertains to me,â€ begins his rant. â€œWe ainâ€™t gonnâ€™a do that. Iâ€™m the only one in my family thatâ€™s gonna take a lick when it pertains to the legal system. Since me, none of my other family members have seen a jail cell. Nobody. Iâ€™m the last one. The buck stops here. I feel that a person that stands behind [his woman for a criminal charge] is a coward anyway.â€

VIBE: I doubt she would have gotten any time.
T.I.: She wasnâ€™t gonna catch it period, â€™cause Iâ€™m there. That wasnâ€™t even a consideration. Even if she asked me to I wouldâ€™ve been like, â€œNah, you trippinâ€™. â€œ
Â So you didnâ€™t feel you were more valuable to your family, employees and business partners on the street?
Thatâ€™s a discussion between me and another man. Not with the mother of my children. Not with the nurturer of my household.
Brittany Cooper
November 26, 2011