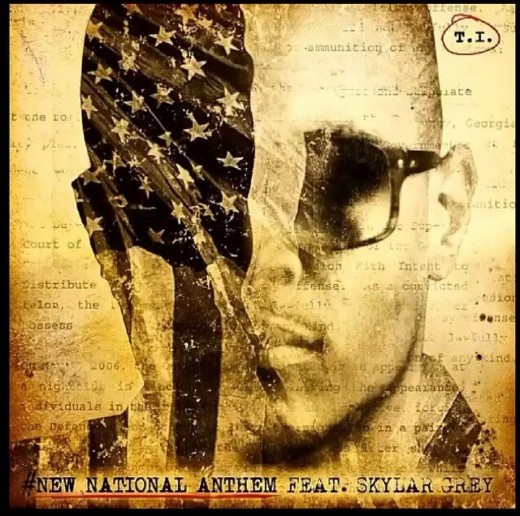 The big homie T.I. releases a new powerful single, “New National Anthem (featuring Skylar Grey).” He wants the world to know what it means to be a black man in America.

Check out the details below!
It has been a day since rapper T.I. took to Instagram to talk about the “monster” America has created! The posts came about due to the senseless killing of Mike Brown, 18, in Ferguson, MI by a white cop. And in T.I. fashion he now wants to deliver a powerful message through his latest single, “New National Anthem (featuring Skylar Grey).”

The revolutionary song depicts what it is like to be a black man in America. The Grand Hustle CEO rap touches on a couple of “elephants in the room.” The MC speaks about racism and injustice toward, and called on the talented Skylar Grey.

T.I. holds NOTHING back. “What the f**k you know about being a black man in America?” he asks. However, Grey’s part (the chorus) is the part that will really get you thinking.

Home of the brave and free (It’s America)
Free just to murder me (land of the handgun)
Land of the beautiful (home of the shotgun)
Cursed by the hate we throw (You’re dead if you ain’t got one)
Is this the new national anthem (It was like this before I got here baby, I ain’t do it)
Is this the new national anthem (I ain’t start it, I’m just a part of it)

I have always admired T.I. for his music. He realizes how much impact his words can have and is not afraid to speak out about social issues in America. Unlike a lot of entertainers, he makes sure his voice is heard.

What are your thoughts on the “New National Anthem?” Comment below!

It’s so important to educating yourself on your history and culture... MUST WATCH VIDEO: A passionate discussion between two women over the removal of...
Read more