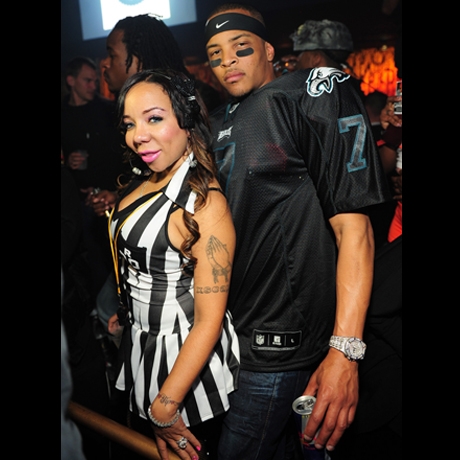 My homie T.I. has been showing face all over Atl since his release from prison. Last night Tip and wife Tiny attended a costume party at the Gold Club in Atlanta. Tip was dressed as Mike Vick when he played for the Falcons and Tiny dressed as a referee.

Tip was definately makign a statement when he showed up with that costume. Mike Vick has been to prison as well but he’s also proven its possible to bounce back.

Sources close to the rapper tell TMZ … the costume was his wife’s idea, but T.I. agreed because he’s been an MV fan since theÂ Atlanta FalconsÂ days … and has a ton of respect for the guy.

TMZ says that Vick loved T.I’s tribute and also had this to say:

Â â€œT.I. is a talented artist and I appreciate his support. I wish him success in everything he does.â€

Good to see that MV supports the homie. Oh and Tip I get ya message homie, you’ve done your time, your past that, you got bigger fish to fry!

What yall think about Tip and Tiny’s costumes?