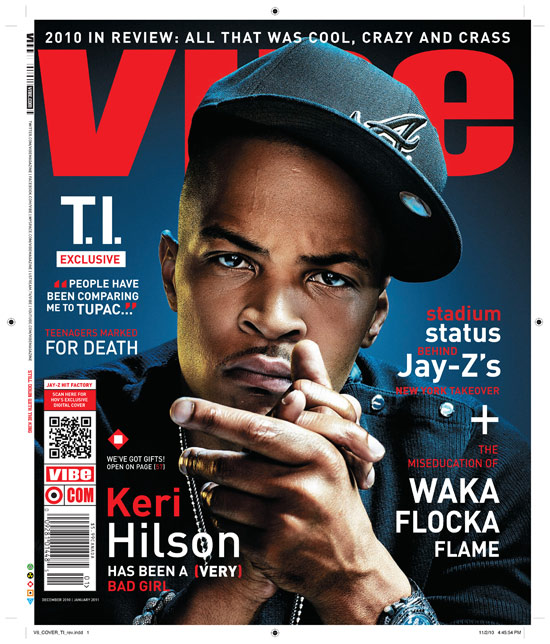 Days before he reported back to prison, T.I. sat down with VIBE’s Erik Parker and gave his most candid interview to date. Here is an excerpt from the explosive cover story. Heres Part of the interview:

If I place my value in the way humans treat me, then maybe. But theyâ€™re human, manâ€•they canâ€™t help themselves. They do that to people they know personally. So how can I expect them to treat me, only knowing me through television? They did that to Jesus. They did that to Martin Luther King, Malcolm X, Muhammad Ali. They did it to every great person you could possibly think of. When it was all good, they was with them. When things got bad, then they was against them.

But in this case things didnâ€™t â€œget bad.â€ Itâ€™s something you did.

Let me just say this: [he sits up on the couch] If you look at a guy who came up, no pops in the house, moms on welfare, food stamps; started selling dope when he was 12, 13 years old, came up handling guns, being in shoot-outs; started going to jail when he was 15. In all of this chaos and this mischief and lawlessness, the person who was just in jail for machine guns and silencers turns his life around. And now you want to crucify him â€•for what? Three pills. I mean, of course itâ€™s wrong and unacceptable and inexcusable. No problem. But in the grand scheme of things, itâ€™s rather petty. Itâ€™s rather petty to hold someoneâ€™s feet to the fire for something so small when they have overcame things that were so big. All that could have been going wrongâ€•if I was riding with more guns, or if I had gotten into a shoot-out and killed somebody, then I could see that. But just think about it. Iâ€™ve gotten it down to this much.

How did you get a drug habit?

I had a lot of work done to my teeth. Oral surgery, extractions, six, seven, eight root canals. Between January to February. As soon as I got out, I had a lot of stuff done. In the joint, you eat shit that is unhealthy for you. I had fillings that fell out and stuff that had to get dealt with. Of course for the pain they gave me oxycontin and hydrocodone. And, mind you, on October 13, 2007, I had cut off everythingâ€•weed, alcohol. Then I get these pills and I start taking them for the pain at first. And then Iâ€™m like, Waitâ€•this shit makes me feel good. And itâ€™s legal. After the pain went away, I kept taking it. I had like five, six prescriptions. So I had, like 80 pills. Everybody else might have a drink or smoke a blunt, I took a pain pill. Times when I had 18-, 20-hour days, Iâ€™d take a pain pill. And eventually I developedâ€•I guessâ€•the beginning stages of dependence.

T.I, currently serving an 11 month prison sentence in Arkansas for violating his probation, hold yo head up fam and stay strong.