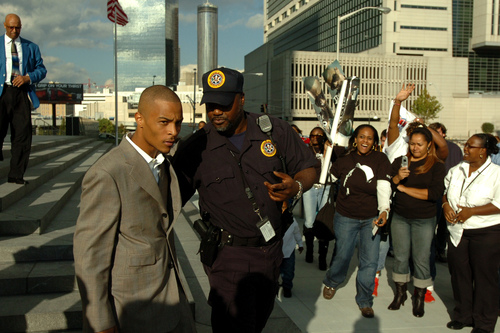 With just a few more months left on his sentence, T.I. is reaching out to his fans. In a new letter posted on his website, TrapMuzik, the incarcerated rap superstar says he appreciates “the continued love and support that everyone has been giving” him. Tip goes on to send a few shout outs to some of his more dedicated supporters, adding that he will be “back in the flesh” in September. T.I. began serving an eleven-month sentence for violating his probation back in November. The emcee and his wife, Tameka “Tiny” Cottle, were arrested in Los Angeles last September on drug charges.
While the drug charges were eventually dropped, T.I. was found to have violated his probation stemming from previous weapons charges. According to the Federal Bureau of Prisons’ website, T.I. will be released on September 29th.

Here is his new song We Don’t Get Down Like Y’all Featuring B.o.B.