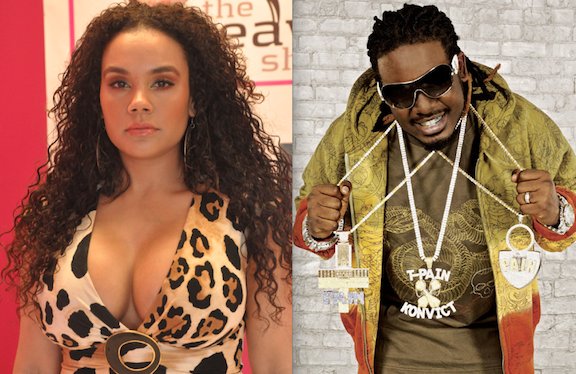 T-Pain is being taken to court by one of the stars of MTV’s “Making The Band Two.” Sara Stokes is suing the “Bartender” singer, claiming he owes her royalties for a song they wrote together for R&B star Jennifer Hudson. In a lawsuit filed by Saramony Entertainment in Missouri Eastern District Court last Friday, Stokes says she produced and co-wrote two songs with T-Pain, including Hudson’s “What’s Wrong (Go Away).” Stokes — who was a part of the group Da Band — alleges that she and T-Pain debuted the original version of “What’s Wrong (Go Away)” on WHHL 104.1 FM in Missouri. The reality TV star says she was surprised to discover that T-Pain, whose real name is Faheem Rasheed Najm, had reached a deal with a third party to allow Hudson to re-record the song.

Stokes’ attorney, Eric F. Kayira, says there are only “slight deviations in the lyrics” between both versions of the songs, adding, quote, “the whole musical composition is the exact same.” Stokes wants to be named a co-author of Jennifer Hudson’s “What’s Wrong (Go Away),” as well as receiving an accounting of income generated from the song, lawyer’s fees and costs. T-Pain’s Nappy Boy Publishing and Universal Music-Z Tunes have also been named in the lawsuit.