More
Home #GOPPresidentialDebate Tamar Braxton Calls Donald Trump Out for Being a Racist on The...
Facebook
Twitter 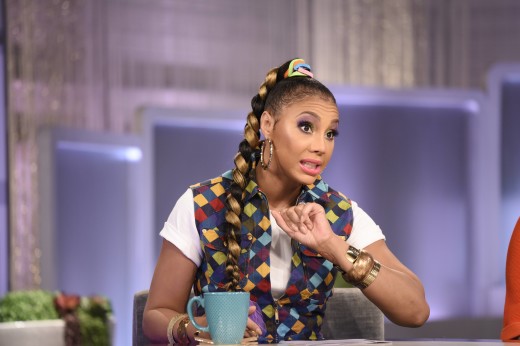 My girl Tamar Braxton has never been one to mince her words and she’s coming for presidential hopeful Donald Trump’s neck on an upcoming episode of The Real.

I was watching the news this morning and he was ranting and I said to myself “This sucka is a plumb fool.” glad to know my girl Tay Tay agrees.

On Monday, March 7, in an impassioned “Girl Chat” segment on The Real, the ladies address the shocking video of a black woman being thrown out of a recent rally for presidential hopeful Donald Trump. Co-host Tamar Braxton calls out the candidate, expressing her honest opinion that Trump is prejudiced; the other co-hosts share her view on certain standards that presidential candidates should adhere to.

Tamar Braxton: Trump Is a Racist!

Adrienne Bailon: Tamar, what do you think about what happened at the Trump rally?

Tamar Braxton: I mean, listen, my nerves are completely on probation. Because you know, I don’t…this tape didn’t play Trump actually telling the girl, [yells] “Get out!” Like, first and foremost, I feel like if you are a racist of any kind, you should not be able to run for presidency.

Adrienne: That’s not what this country is supposed to stand for at all. With liberty and justice for ALL.

Tamar: And we are a melting pot, like, for me, it’s so disturbing and disgusting because there’s white people in my family, Mexican kids running around the house with Trina and them. And it’s just like…

Tamar: [Continued] No, they in my family, no, really. And it’s like, we don’t talk about you, know, “You’re black. You’re white. You’re Mexican. You’re other.” Like, we don’t do that. Everybody is all one and the same.

Tamar: And I’m just disgusted that somebody who’s running for president…. You’re not even in the house yet. Let’s just say, God forbid, you become the leader of the free world and you are already setting the standard of how you gonna run. You are a racist! You are already showing everybody who you are.

Loni Love: What happened in that video…I will agree with you is wrong.

Loni: And people should be able to go to, um, a rally and not get pushed around. I will say that.