Tameka Raymond And Usher At Odds Over Money And Child Custody

Tameka Raymond and her ex husband Grammy Award Winning singer Usher Raymond divorced back in early 2009 where they had a brief two year marriage. During their marriage they had two young sons but the now divorced couple have been at odds over money and custody of the kids. According to Tameka, Usher is not following court orders and has now filed a petition to recieve sole custody of their sons. She also claims the singer has cancelled her Saks Fifth Avenue credit card which displeases her greatly…..interesting. Check inside for more deets on the drama and what else Tameka has to say about her ex husband.

According to legal papers obtained by TMZ, Tameka has stated that not only has Usher failed to let her know he is taking the children outside of the state, he has also failed to let her have control over the nanny choice for the boys and does not call her to watch her own kids when he is away for long periods of time. When the two divorced and agreed to joint custody Usher is supposed to give the boys to Tameka for 2 weeks during Christmas and in the summer and he has done neither. She is asking the court to release his parental rights ASAP! 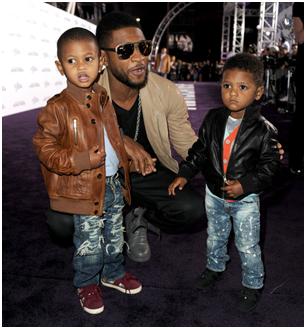 Tameka is also upset with the fact that Usher is behind on child support payments and owes her a whopping $34,000. The documents even discuss Usher’s decline in salary due to the fact that he is not making as much money as he was back when they were together which prevents her from recieving more than $5,000 a month. The two have a scheduled hearing about these matters this Wednesday.

I wonder what the judge will say about Tameka’s disgust with the cancellation of her Saks credit card….seems like a want more so than a need. What do you think about this new developing drama? Should she strip her ex husband of joint custody?