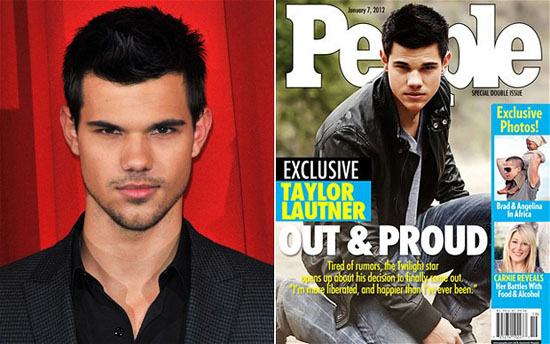 It appears some talented graphics designer wanted to make fun of the vampire guy in spotlight. A fake cover of PEOPLE magazine went viral on the Internet with Twilight star Taylor Lautner on it.

According to the fake cover created by some Internet pranksters, the star is said to be tired of rumors and deciding to finally come out. It also quotes Lautner as saying, “I’m more liberated, and happier than I’ve ever been. Not to mention the big headline on the cover that reads, “Taylor Lautner : Out & Proud.”

The magazine date reads January 7th, 2012, leading a lot of people to believe that it was the next issue of PEOPLE magazine to be released. Even though there was no link to the magazine’s website, the cover went viral on the Internet as people started retweeting and sharing it with their friends and followers.

The cover design was so realistic that even people like Russell Simmons fell for it who tweeted, “proud of Taylor Lautner for his bravery and courage.” However, he removed his tweet as soon as he figured out that the cover was fake and tweeted that he was disappointed to see that people would joke about someone coming out about their sexuality. “Let Taylor Lautner be whoever he wants to be,” he wrote in his follow-up tweet.

A representative on behalf of the magazine confirmed that the cover is absolutely fake. I bet Taylor’s pissed cause if you didn’t think he was gay you might now… What yall thinking?