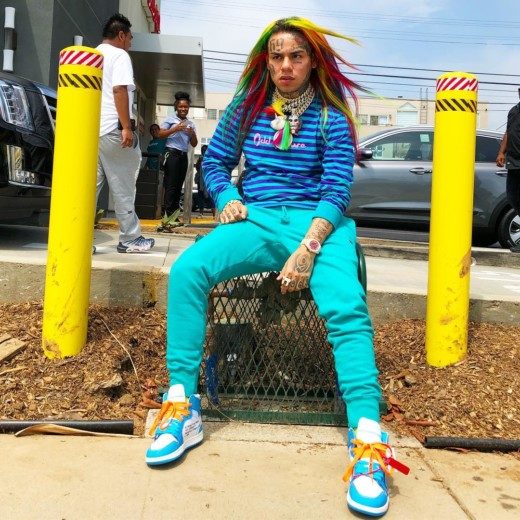 Ludacris recently injected a Tekashi 6ix9ine joke into the new Wild N’ Out trailer and the rainbow-haired rapper evidently isn’t happy about it.

In the clip, Luda is asked by a 6ix9ine impersonator if he’d rather sign Nick Cannon or 6ix9ine to his Disturbing Tha Peace imprint.

“That’s an easy one for me,” Luda replies. “I’d sign Nick Cannon, ’cause Tekashi, I don’t know how much longer he gon’ be around.”

#6ix9ine doesn’t have a chance in @Ludacris‘s eyes ? | You don’t want to miss TWO back to back episodes of #WildNOut TOMORROW at 10/9c on @MTV! ? pic.twitter.com/0uj3QvLLvw

On Thursday (August 23), 6ix9ine uploaded an Instagram video (which has since been deleted) to his account and blasted the Hip-Hop vet.

“Luda, Luda, Luda, you bum ass, pussy ass Fast and the Furious geek-playing, role-playing ass — yo, suck my fucking dick Ludacris!” he says in the clip. “This is what you’re known for you irrelevant muthafucka.”

He then proceeds to mock Luda’s feature on Justin Bieber’s “Baby” video, asking “What the fuck is you doing?”

Later, 6ix9ine dons a New York Yankees hat, some baggy jeans, and a black t-shirt in an effort to imitate Luda.

6ix9ine’s wrath comes roughly two weeks after he told YG to “suck my fucking dick,” a phrase that seems to be a favorite of his.

Watch the video below.

#tekashi69 tell ludacris to suck his d*ck ? (brb we gotta find out what ludacris did)