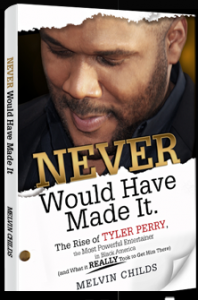 I know Tyler not happy to hear about this new book coming out about his life, and how he never would have made it if?

Just when we thought the tell all book genre was only for video vixens trying to expose rappers we get introduced to Melvin Childs, a former business partner of Tyler Perry’s who is planning to write a tell all book entitled ‘Never Would Have Made It’.

The book will be about how he discovered Tyler and how he was ultimately betrayed by him.

Check inside for a snippet of a chapter and a video trailer for the upcoming book.

Here is this snippet from Chapter 2 entitled Just Act Normal:

Producer Promoter Melvin Childs describes his disappointment after seeing Tyler Perry again for the first time years after the abrupt and painful parting of the ways.

His words, “Melvin here was my first promoter,” rolled around in my mind as I got closer and closer to home.

The more I thought about it, the more it started to piss me off. Was I just a promoter when you came to me for a loan because you didnâ€™t have the money to pay your cast? Was I just a promoter when you called me to borrow money to buy food or when I personally paid for the hotel you were living in while you were supposedly homeless? Maybe I was and if thatâ€™s the case, then so be it. But guess what? Regardless of what he wants to call me, I was there. And because I was there, I also have a story to tell.

Check the video trailer below:

What are your thoughts on the chapter snippet? Will you be copping the book once it’s released? I can only imagine what Tyler is thinking right now. This is crazy!!!