Terrance J Talks About His Acting Career, Cougar Love and Leaving A Legacy 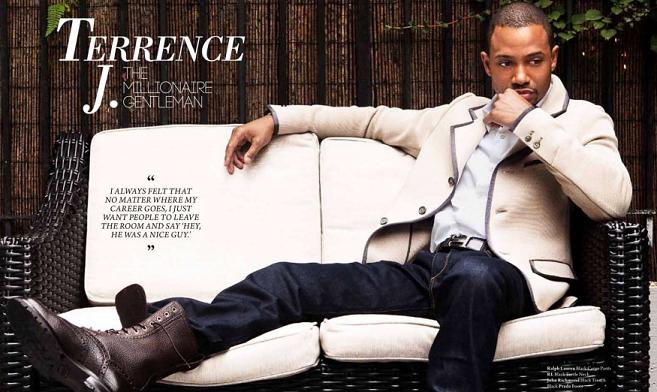 We were introduced to Terrence J six years ago as the new host of 106 & Park along side his co-host Rosci Diaz. Within those few short years, Terrence has managed to take his career above and beyond by becoming a producer, business man and a serious actor (with a Golden Globe nomination under his belt for theÂ movieÂ Burlesque.)

Heâ€™s currently featured on this monthâ€™s cover ofÂ Bleu magazineÂ with the caption â€˜The Millionaire Gentlemanâ€™. Inside, Terrence speaks about his strong work ethic, dating life and relationships. Check out an excerpt below:

On becoming a better actor
Iâ€™m not anywhere near where I think my full potential is. Hopefully one day Iâ€™ll be able to play a young Barack Obama coming out of law school or Sidney Poitier right before he got his Oscar.â€

On being a cougar lover
I dig mature women. I dig a woman that knows what she wants, thatâ€™s comfortable in her skin andÂ confidentÂ with her swag. Older women have been able to fulfill that.

On his current relationship status
Iâ€™m dating a girl thatâ€™sÂ younger. Sheâ€™s not much younger but sheâ€™s 28 and Iâ€™m 29 so sheâ€™s younger than me.â€ Sheâ€™s an amazing person. I just think timing is everything. It can be the perfect person, but if itâ€™s not the perfect time then itâ€™s not going to work.

On how he wants people to remember him
I always felt that no matter where myÂ careerÂ goes, I just want people to leave the room and say â€˜hey, he was a nice guy.

On his future personal plans
The aspiration is marriage and kidsâ€¦building aÂ familyÂ and leaving a legacyâ€¦As Iâ€™m entering into my 30â€²s, Iâ€™m looking forward to all those thing

Well, personallyÂ I’mÂ glad the homie can step away from the whole “106 and park” thing. Its getting a bit old and he’s not a bad actor! In case youÂ haven’tÂ heard, Terrance J has been spotted with supermodel, Selita Ebanks. It’s rumored that they are an item…….if so I can see how he got her! Take notes fellas!