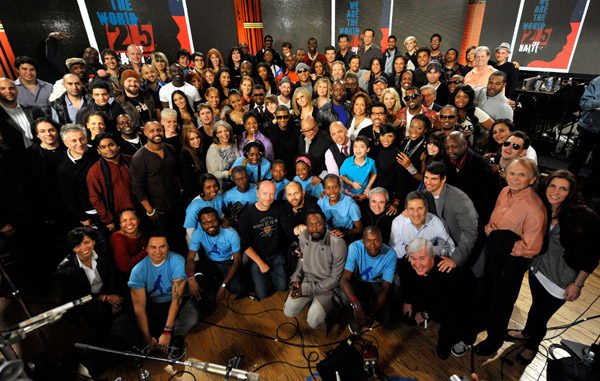 TheYBF.com is reporting that about 100 celebrities hit Jim Henson studios in L.A. yesterday to re-record Quincy Jonesâ€˜ 1985 production of â€œWe Are The World.â€ Quincy and Lionel Richie came together to produce the 2010 version called the â€œWe Are The World 25 Years for Haiti.â€

The charity anthem â€œWe Are the Worldâ€ has been given a hip-hop, pop twist by 80 artists who have re-recorded the 1980s hit in the same Hollywood studio where the original was cut 25 years ago.

Here is the original version of the song of Â We Are The World Feat. Michael Jackson Lionel Richie Cindy Lauper Steve Wonder Bruce Springsteen we are the world…

Here are some of the info -& flicks…

â€œThis one, the enthusiasm, Iâ€™ve never seen anything like it,â€ said Lionel Richie, who wrote the original â€œWe Are the Worldâ€ with Michael Jackson, and oversaw the redux version with music mogul Quincy Jones, 76.

At one point during a break, the musicians broke out into an a cappella version of the pop classic â€œLean on Me,â€ a classic moment jump-started by singer Melanie Fiona leaning on another artist because her feet were tired.

Gesturing with her hands, and shifting her headphones from ear to ear, Barbra Streisand recorded her solo over and over again, completely absorbed in the recording process and stopping only to correct her pitch.