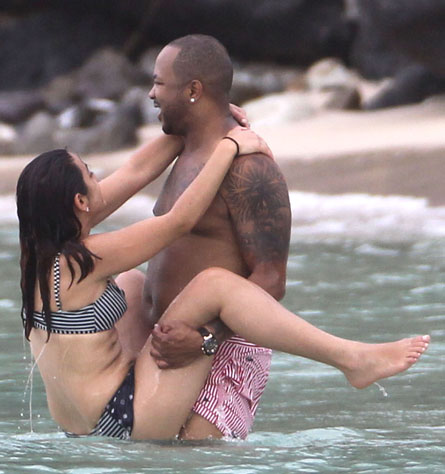 It seems as though ‘The Dream’ is now living ‘The Nightmare’ as pictures of him, infidelity, and his assistant appear on the internet (July 13). While Christina is home taking care of there 5 month old child, Dream has been caught Â by the papparazi in theÂ Caribbean water freaking Melissa Santiago. Christina Milian’s marriage to R&B star The-Dream has turned into a nightmare. “Us” magazine is reporting that the couple has separated. A representative for The-Deam says, quote, “Terius ‘The-Dream’ Nash is saddened to announce that his marriage to Christina Milian was unsuccessful. The couple reached this decision in late 2009, but decided to keep the news private in efforts to protect their baby daughter Violet. They ask for consideration and respect for their family moving forward.” The news of the couple’s separation comes after photos surfaced of Nash getting cozy on a Caribbean beach with a woman who was not Milian. “Us” reports that the woman in the picture is The-Dream’s assistant, Melissa Santiago.
The-Dream and Milian have a five-month-old daughter together. News of Milian’s pregnancy came right after the couple eloped in Las Vegas, Nevada in September of 2009. They exchanged vows for a second time in a December ceremony that took place right before their separation. The-Dream proposed to Milian with a six-carat diamond ring in July 2009. The producer also has three children with his ex-wife, singer Nivea.

Shout out toÂ Dlisted for the pic’s,