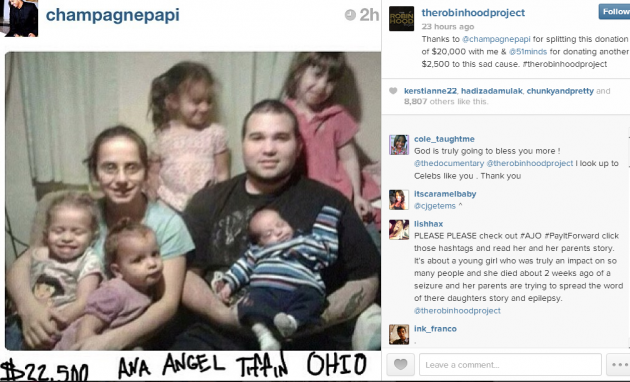 The Game’s Robin Hood project is doing so much for people all around the world, and now Drake is joining the cause.

First off the Robin Hood project is The Game’s pledge to donate $1 million to people in need, and in his latest project he’s paying for the funeral of a family that tragically lost their lives in an Ohio house fire.

Anna Angel was working at a Burger King when a fire robbed her of her home, all her positions, and most importantly her five children and boyfriend.

The Game was moved to act. He posted about the tragedy on Instagram with the caption,

“I can deal with a lot of things but people losing their children is something that kills me every time.”

“What [The Game] is doing will never be forgotten. Honored to be able to help people along side my brother.”

The Game has so far fed the homeless, and paid for the funeral of a 6-year-old girl that was gunned down in California, an initiative Snoop Lion even helped out with.

I applaud The Game on what he’s doing; check out his instagram to see who else he’s helping through Project Robin Hood.