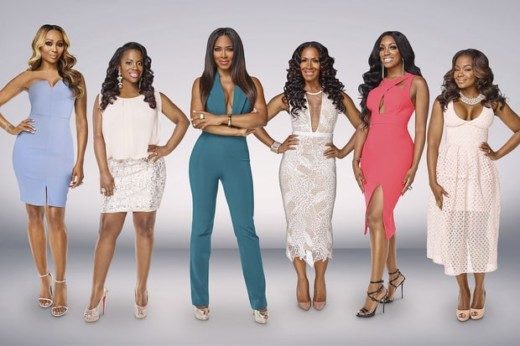 On the Sunday, March 19, episode of The Real Housewives of Atlanta, both friendships and romances were tested, with different results.

Things started cordially as new BFFs Kenya Moore and Phaedra Parks batted a tennis ball around while comparing themselves to the Williams sisters. Kenya took this as evidence that their friendship was solidifying, but Phaedra commented to the camera that she was proceeding with caution, especially when it came to discussing her divorce. In fact, she had decided that the only woman in the group she was going to discuss it with Porsha Williams. (We’ll loop back to that later.)

Cynthia and Peter Discuss Their Future

Peter Thomas’ birthday happened to fall during the group’s Hawaii trip, so Cynthia Bailey brought her soon-to-be ex-husband room service as a treat. As they enjoyed the meal, Peter commented on how “weird” it was being in the same hotel together but not the same room. To the camera, Cynthia admitted she could “possibly consider hooking up with Peter,” noting that sex had never been a problem in their relationship. As a gift, she gave him a blinged-out Bible, which he thought was “a strange gift”.

He asked her if she was dating anyone and she said “not yet,” which wasn’t exactly what Peter seemed to want to hear. This prompted a heart-to-heart between them about what had gone wrong in their marriage. Peter said he was reflecting on whether he had been a bad husband and Cynthia said she didn’t think he had failed her. She felt that she was the one who failed. Still, she didn’t want to get back together.

Later that night, Kandi Burruss’ husband, Todd Tucker, decided it would be fun to roast Peter for his birthday. Sheree Whitfield, her ex-husband Bob, Kenya, Cynthia, Kandi, Todd, Phaedra, Porsha and her boyfriend, Todd Stewart, all met for dinner and the roast. Everyone could sense the tension between Sheree and Bob still lingering from their recent fight. (ICYMI, Bob made a joke about choking her that she didn’t find very funny and then tried to make it up by buying her jewelry.) The roast was mildly successful despite Sheree and Bob’s bad vibes, but Cynthia couldn’t bring herself to make fun of her former love — which was, strangely, kind of sweet.

The group headed out for an evening boat ride and Bob tried his best to make up with Sheree. “I wanted to apologize,” he said. “You don’t even see anything wrong with you leaving and not calling the house for six months,” Sheree replied. This clearly wasn’t just about their spat in the jewelry store. “And then when you talked about you saw me without my seatbelt and you wanted to slam on the brakes and eject me from the car. To put harm on me, or death. It’s abuse. It’s mental abuse and then for you to make a joke of it — it’s just been like that the entire time.” Bob insisted he was a changed man, but Sheree said she wasn’t “buying it.”

Bob got frustrated and asked, “You want me to bleed myself right here? To slit my f–king wrists so you know I’m serious?” Sheree explained she just wanted him to have “remorse” for what he did. He said he was remorseful, but Sheree was done. “As far as he and I, it’s over,” she said to the camera. “I feel like I’m finally getting closure on that part of my life.” Guess this romance wasn’t going to be rekindled after all.

No One Wants a Divorce Party

Poor Kenya. She really can be so clueless. Somehow, she got the idea that Cynthia and Phaedra would love to celebrate the end of their marriages with a “divorce party.” Kandi, Sheree, Porsha, Cynthia and Phaedra arrived for the surprise event and had mixed reactions upon seeing the giant banner announcing the theme. Cynthia was polite about it, but said she didn’t want to celebrate this event, and she actually looked like she was about to cry. Phaedra immediately announced she was feeling sick and excused herself.

Kenya soldiered on, however, forcing everyone who remained to play a “kiss the penis” game, which was a sort of R-rated version of “pin the tail on the donkey.” After they finished that activity, Porsha broke the news that Phaedra was pretty mad and read a text that Phaedra had sent to her after she’d departed. “I’m good, but I’m appalled that they would think that the breakup of a family is the cause for celebration and with the host being the trifling woman who was texting my husband — disgusting and disgraceful,” Porsha read.

She then headed to Phaedra’s room armed with a giant bottle of Hennessy, where Phaedra complained that the divorce party was celebrating destruction and making light of the sacrament of marriage. “Have you even told them it was final?” Porsha asked. Phaedra said she hadn’t. “I told you not to get close to that heifer,” Porsha said of Kenya — which was right when Kenya knocked on the door.

Kenya seemed genuinely confused about why Phaedra was upset. “You’ve said so many times that you are in the best place that you have ever been,” Kenya noted. Phaedra replied by calling Kenya “trifling,” which she didn’t like that much. “I’m not trifling!” Kenya shouted. This led to a discussion about whether Kenya had inappropriately flirted with Phaedra’s ex-husband, Apollo Nida, or not. “Do you blame me for your marriage breaking up?” Kenya asked. Phaedra said she didn’t, but that she did think Kenya “continuously flirted” with Apollo. “It’s just a whole other level of skanky,” Phaedra said to the camera. To Kenya, Phaedra said, “You were disrespectful of my marriage.”

Kenya then called Phaedra a hypocrite for leading her restoration service. “The only thing she has restored in me is knowing that she is as shady as she ever was,” Kenya said to the camera. Scratch that friendship goodbye. Again.

Meanwhile, Porsha returned to the divorce party room and somehow announced that Phaedra’s divorce was finalized.

Tell Us: Do you think Phaedra is going to be angry with Porsha?

The Real Housewives of Atlanta airs on Bravo Sundays at 8 p.m. ET.