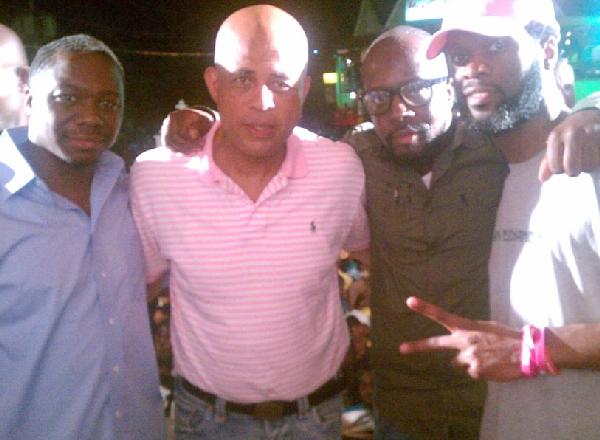 Its a sad day when people try to hurt others who come out to uplift their community, and support positive change. Elections in Haiti were this Sunday, March 20, and presidential candidate Michel Martelly â€“ shown above in the photo with Jimmy Rosemond, Wyclef Jean, and Pras â€“ is expected to win.Â The homies over at Allhiphop are reporting Wyclef John says “Enemies of Progressive Change” are after him. Here’s what they had to say.

Organizers of Wyclef’s most recent trip to Haiti have spoken out about a recent incident in the country, where the rapper was shot. Â Wyclef Jean was shot in the hand in Haiti yesterday evening (March 20th), during a tour of the country to support Presidential candidate Michel Martelly.

Martelly is running against law professor and former first lady Mirlande Manigat, after massive fraud was uncovered in the first round of voting in November.Jimmy Rosemond helped organize Wyclef’s trip to Haiti, and a concert last week encouraging peaceful elections.Â Tens-of-thousands of people attended the concert, which featured The Fugees (and Lauryn Hill) Busta Rhymes, Michel Martelly and a host of local artists.

“It is clear that enemies of progressive change in Haiti are behind the shooting of Wyclef -those that don’t want to accept that a monumental change is inevitable for the betterment of the Haitian people,” Jimmy Rosemond told AllHipHop.com.

“This incident will not deter those of us that see the election as crucial to the country’s future,” Jimmy Rosemond continued. “Today, hundreds of thousands of Haitians are heading to the polls to determine the leader of Haiti.”

Haiti is still recovering from a 7.0 earthquake in January of 2010, that incredibly left over 300,000 people dead and millions displaced.Â The Reverend Al Sharpton, President of National Action Network, has worked with Wyclef issues like education and aid for Haiti after the earthquake.Â Rev. Sharpton told AllHipHop.com that he was praying for Wyclef and the people of Haiti during the elections today.

“We are happy that Wyclef is okay but we continue to pray for him and for a peaceful and fair election today in Haiti.”

According to sources in Haiti, the elections have already started late, as some polling stations are still waiting for materials and ballots.Â So far, the country is calm, as both sides have continuously urged restraint.