TheShoeGame.com Shut The Nike Store At Lenox Square Mall Down! 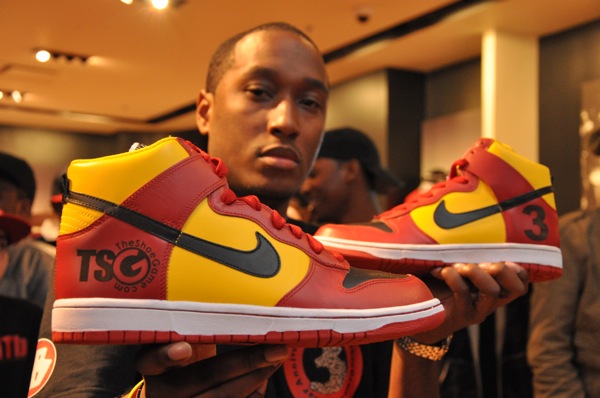 My homie G-Roc from TheShoeGame.com and his staff hosted their 3 Year Anniversary event at the Nike Store Lenox Square Mall. The event was crazy and packed with sneakerheads from Atlanta. People also came to support TheShoeGame.com from New York, Alabama, Cincinnati, Los Angeles, Tennessee, and South Carolina. TSG definitely did it B-I-G, and you would think throwing an event at the Nike Store was enough, but NO, they gave away so much stuff. They gave away 2 pairs of Space Jam Air Jordans, 3 pairs of Gucci SB Dunks, 2 NikeiD sessions, LeBron 7’s, and a bunch of t-shirts.

DJ Greg Street was the official DJ for the night and Air Force 1 guru, Mayor was the special guest. Rosco Dash performed his hit “All The Way Turnt Up”, and up and coming ATL trap rapper, Pill also hit up the event to show love. All in all, it’s no doubt that TheShoeGame.com has a massive following. The event will most likely go down in sneaker history for them being able to get the Nike Store to throw their party, and with all the giveaways.

Check out the images below:

Shamea Morton is an actress and singer, who currently works as the Atlanta Hawks in-game host as well as a cast member for Real...
Read more