Posa is an Alabama born rapper. He has recently been featured on Rolling Out Magazine and Hip-Hop Dx. In a interview with DX Posa goes in depth on his new hit song.

The ‘Dropping Jewels’ music video really just consist of me just vibing…riding through the city on sum regular shit,” Posa explains to DX.

“Nun too fancy, something you see every day in the streets ‘everybody block’ through they city to catch different vibes. This just me riding and venting giving game to my people.” 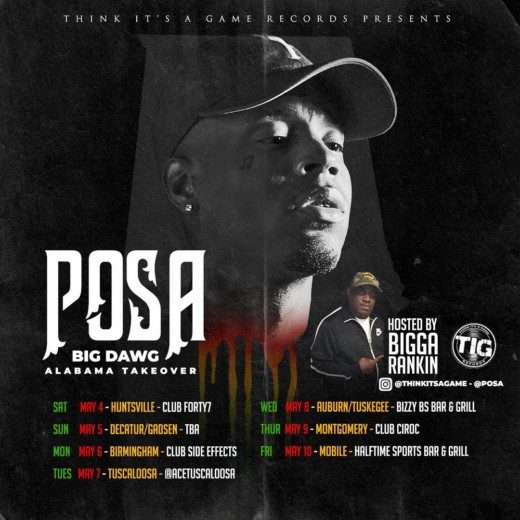 Posa seems to be dropping hit after hit. He recently released a song with MoneybaggYo called, “Big Dawg.”
MoneybaggYo is a rapper and songwriter who signed with rapper Yo Gotti in 2016. Sources say he also inked with Interscope. The track Posa and Moneybagg released together is currently buzzin in the streets, yet Posa hasnt relaxed.
Posa is now on his “Alabama Takeover” tour with Bigga Rankin. He’s visiting Huntsville, Decatur, Birmingham, Tuscalposa, Auburn, Montgomery, and Mobile.
May 9, 2019

Omeretta the Great,has created a bit of uproar with her "Sorry Not Sorry" record, watch video suggests that if you don't live in Fulton County...
Read more
Music Video

The young g.o.a.t. breezy is back with another one , "Iffy". https://www.youtube.com/watch?v=hLpAZ8_BZS4
Read more
Entertainment

The IRS has come to terms with the administrator of Prince's estate, Comerica Bank & Trust, after years of fighting about what exactly the...
Read more
Music Video