Tiny Gives Back To Her Father In A Big Way + T.I. Dropping New Album August 24th 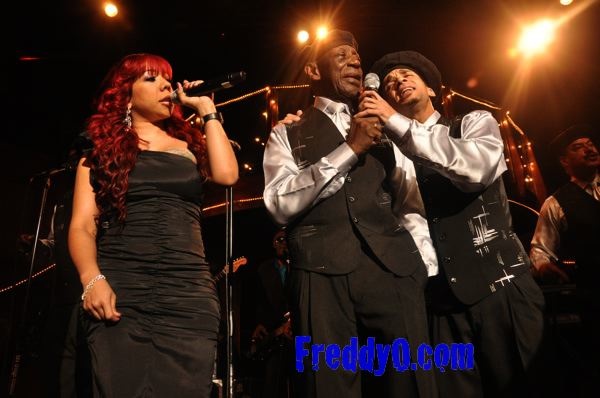 Recently Tiny & Toya just finished taping their second season of their number 1 hit show “Tiny and Toya“, produced by James DuBose of Dubose Entertainment. This season of the Tiny & Toya Show will be completely different from last and will be filled with a better storyline. One of the uplifting story lines that you will find out about is Tiny and her relationship with her father. Tiny recently had an event to help raise funds for Alzheimer’s patients research, called “For The Love of Our Fathers.” Tiny also took the stage for the first time in a very, very, very long time to let these ladies know she’s still got it. Here are some flicks of her and her father and them singing their hearts out live on the stage. Priceless...

In other news With just a few more weeks left on his prison sentence, T.I. is ready to start giving fans new music. The emcee spoke with MTV News on Monday and revealed that his next album will be hitting stores on August 24th.

The first track off the record, “I’m Back,” is now available online, and Tip says the cut discusses a few things that needed to be made public. He explains, quote, “It’s a lot of things that needed to be spoken on. In my absence, it was a lot of things that went down, a lot of matters needed to be addressed. This was the greatest platform for me to do it.” T.I. – who will be released on March 26th – says fans can expect him to return to the public eye by the middle of April or beginning of May. The emcee goes on to say that it will take more than a prison sentence to hold him down, adding quote, “As long as there is air in my esophagus, champ, I’mma keep going.”

T.I. began serving a 366-day sentence for federal weapons charges last May. This past December, he was moved from an Arkansas federal prison to a halfway house in Atlanta. T.I. made his first appearance since heading behind bars last month when he joined his fiancÃ©e, Tameka “Tiny” Cottle, at her Alzheimer’s research fundraiser “For The Love of Our Fathers.”

Actors Demetria McKinney (House of Payne) and Brad James (For Better or Worse) have both been a part of the Tyler Perry empire both...
Read more
Artist Spotlight

FreddyO was on the scene today to meet 3 very inspiring couples coming to OWN TV's new series "To Have and Hold Charlotte". I...
Read more
Celebrities in Trouble

Andrien Broner, American professional boxer is a young multi-millionaire. Carrying large amounts of money is not flexing to him. Perhaps, this is why he...
Read more
#GOPPresidentialDebate

Katie referenced as the “Queen Of Drill” is gladly adjusting her crown this new year with a brand new single called “Work It Girl” released...
Read more
Artist Spotlight