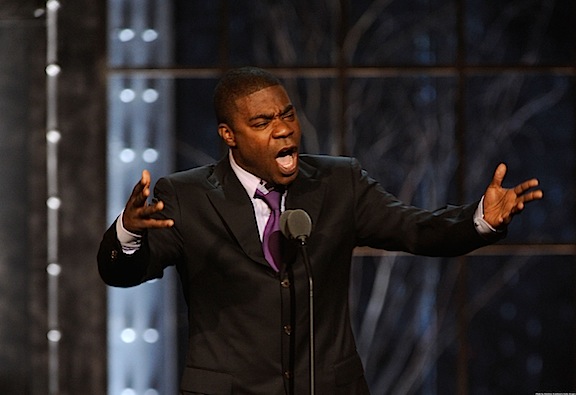 Tracy Morgan is still recovering from the gay remarks he joked about on one of his comedy sets last week. to clear up his name he has been doing a lot of public speaking to reassure his audience that he is not a homophobe and love the gays. He gets pretty deep and reveals that although his father wasn’t gay he died of aids and was teased by kids as a child.

“I know how bad bullying can hurt,â€ Morgan said. â€œI was bullied when I was a kid. I’m sorry for what I said. I didn’t mean it. I never want to use my comedy to hurt anyone. My family knew what it was like to feel different. My brother was disabled and I lost my father to AIDS in 1987.
â€œMy dad wasn’t gay but I also learned about homophobia then because of how people treated people who were sick with that. Parents should support and love their kids no matter what. Gay people deserve the same right to be happy in this country as everyone else.

â€œOur laws should support that. I hope that my fans gay, straight, whatever forgive and I hope my family forgives me for this.”

Morgan announced that he will be meeting this week with LGBT teens who were shunned or left homeless by their parents as well as parents who lost their children to anti-LGBT hate crimes.