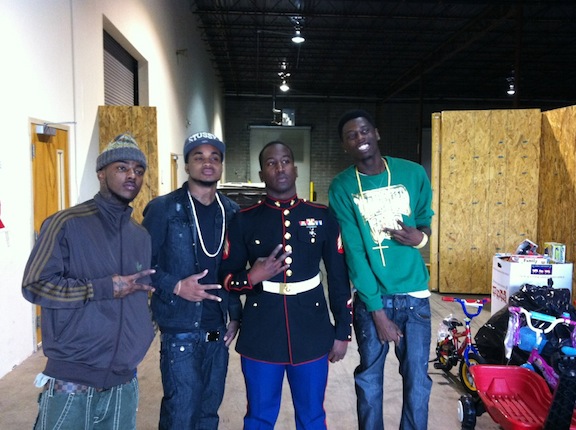 On Tuesday evening rap trio Travis Porter took the nation by storm with their free “Fan Appreciation Concert: A Giving Experience” with more than 106,000 USTREAM viewers, selling out Center Stage with more than 1,200 fans of all races and ages, collected more than 4,000 toys for Toys For Tots and 600 non-perishable items for The Atlanta Community Food Bank and C.H.O.I.C.E Foundation giving away 50 Atlanta Hawks tickets.

The monumental experience influenced Twitter fans to name Travis Porter the “Kings of Atlanta” because of their brilliant execution to bring their city together in order to show their appreciation with their true love – music. Bringing out some of Atlanta’s most respected, influential artist like Diamond, Sammie, Pastor Troy, Rich Kids, Young Joc, FKI, MIG, Yung Chris just to name a few gave the crowd a roaring experience.

With their newly signed record deal with Jive Records and MTV Jam of the Week “Make It Rain,” which has also reached more than 8.4 million views on World Star Hip Hop in just two days, and their leading single rising up the charts at No.16 on Billboard, Travis Porter is in motion to the very top and beyond.