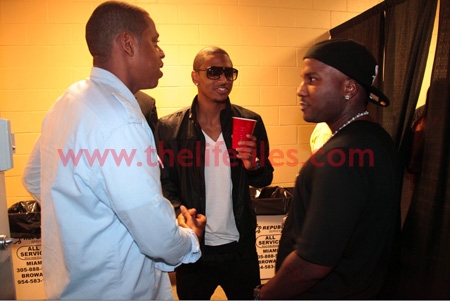 “Say Aah” singer Trey Songz is working on getting rapper Jay-Z to collaborate with him. Songz is currently on Jigga’s “BP3” tour with Young Jeezy. Rap-Up.com says he hopes he and his tour mates can get on a record together. The singer says, quote, “We’ve spoken about collaborations — Jay, Jeezy, and I — and hopefully it all works out. I’mma do my part. I got the record to play [Jay]. We’ll see what it is.” With the ball in Jay-Z’s court, it’s hard to tell if he’ll have time to get in the studio with Songz and Jeezy anytime soon. The “BP3” tour runs through March 26th. That’s when it’s scheduled to wrap up its U.S. leg at the Staples Center in Los Angeles. Jigga takes a little break from touring then — meaning he’ll only be playing the Coachella Valley Music & Arts Festival in Indio, California on April 16th. But Jay-Z will start back up in June with a European tour. His first date is on June 4th in Germany.