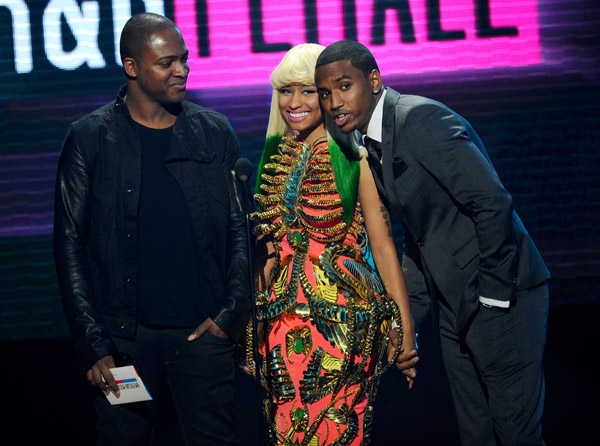 A production company is suing Trey Songz and others (including Kodak) for some serious cash over his â€œBottoms Upâ€ hit. I know, – – I am thinking the same thing(what the hell?) but apparently the production companyÂ says they own the rights to the song.

Here’s all the info:

According to the lawsuit, which was filed February 2nd in the Southern District of New York, Doc Mob hired producer Milton James aka â€œTony Scalesâ€ to produce the original, copyrighted track for â€œBottoms Upâ€ for his company, Doc Mob Records. Price and Doc Mob further claim the track was originally produced by James in Priceâ€™s home studio.

At some point, James teamed with producer Kane Beatz who added production to the song, which was eventually used by Trey Songz and Nicki Minaj. The lawsuit claims that â€œBottoms Upâ€ was contained on Trey Songzâ€™ hit album Passion, Pain and Pleasure but only listed Kane Beatz as producer of the song.

Doc Mobâ€™s Derrick Price alleges that he sent multiple cease-and-desist letters to Atlantic Records and Trey Songz, but they were allegedly ignored by the defendants in the case. Kodak has been dragged into the $18 million dollar lawsuit, for using the song in an advertising campaign featuring Trey Songz.

You can read more @ GossipOnThis

Hold yo head up Trey they always try to take you down when you are on top!!!!