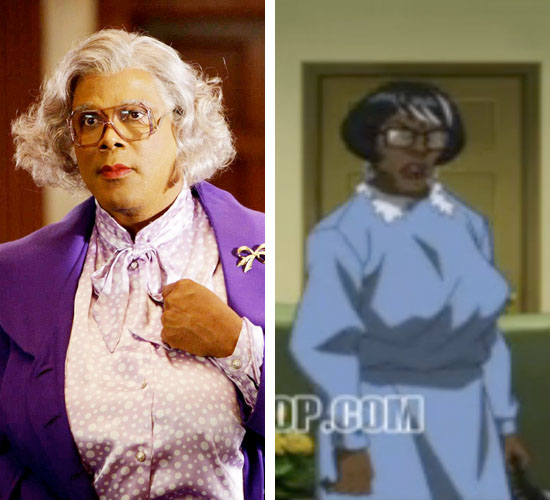 Tyler Perry can’t take the heat, so Madea trying to get out of the kitchen. Perry is attempting to sue Boondocks creator Aaron McGruder for making an episode about him. Honestly, it was pure hilarity. Check out the clip below.

Remember a few days ago when we showed you an episode of The Boondocks which was supposed to be about Tyler Perry?

The one that made Tyler look like a flamboyant gay dude – who SEXUALLY HARASSED all the men around him. Well word on the street is that Tyler is trying to SHUT IT DOWN!!!

According to one fairly reliable MediaTakeOut.com snitch, Tyler has contacted a TOP ATLANTA LAW FIRM and will be seeking an INJUNCTION – to stop you from EVER SEEING that episode again.

Come on now Mr. Perry. You can’t stop this man’s freedom of speech. I mean, he depicted a man that acts as a woman…but was a gay cross dresser at night who ran a cult. Perry is taken to task for exploiting black women, Christ and negative stereotypes of blacks through the character of Winston Jerome. McGruder likens being a part of Jerome’s crew to joining a cult of “homo-erotic Christians.”Â All I know is…a hit dog will holler. First it was Spike going in on him, now Aaron. Check out the Boondocks clip below!

Pic via GOSSIP ON THIS