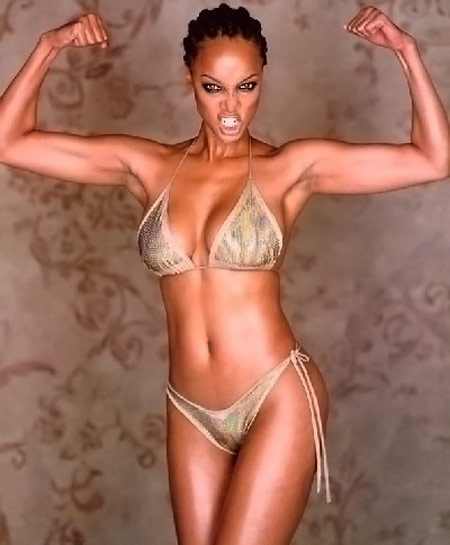 Tyra has to do some damage control. In a recent plug for her new season, she was surprised at how small the young models waist was. She actually looked a little anemic/bulimic. But, Janice Dickinson is not buying the apology. You know, that look is praised in the model world, but in reality, it’s just not healthy.

Janice, who spent some time herself behind the “ANTM” judges’ table, told Access Hollywood’s Shaun Robinson on Thursday that she isn’t buying Tyra’s excuse.

“[Ex]cuse me, but Tyra is the executive producer of that show,” Janice told Shaun. “She has her finger on everything. No, I don’t believe it.”…..

“Everything they shoot is intentional,” Janice added. “Don’t tell me different. I did it for five seasons. Snap,” the former supermodel declared.

View the video below!

“I am truly sorry for the style in which the Top Model promo clip was presented. Like all of my projects, I am extremely involved in “America’s Next Top Model” from casting the final contestants to conceptualizing the episode challenges, but with all the work and details that go into producing a TV show, I can’t be 100 places at once (although I try), but it’s just impossible for me to see everything that’s created before it’s released to all of you! That being said I can assure you – that cut has been removed from the CW airwaves, and the message conveyed in that video was NOT intentional, and is certainly not Top Model- or Tyra-approved. The Top Model team is extremely talented and truly enjoys creating fun, engaging promos and episodes for you. The team really wants to entertain you, while promoting and embracing multiple forms of beauty. Sometimes in the quest to have fun in a limited amount of time, especially in a 20-second promo, our overarching message can be misconstrued, and in this case it most certainly was.”

What do ya’ll think?? Was it an intentional marketing ploy?