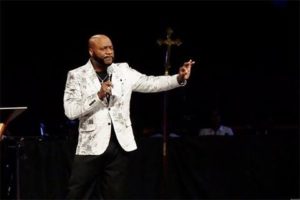 New Birth Missionary Baptist Church’s senior pastor Eddie L. Long has died, according to the church. He was 63 years old.

“Today it is with great sadness I announce that our bishop has transitioned,” Bishop Christopher C. Smith said.

The expectant crowd, many already informed by social media and text messages, wailed and shrieked at the official announcement.

Praying for Mrs. Long and the New Birth family. I’m so glad I had a chance to work with him in September and take this pic. I had the most amazing experiences and lessons learned that will forever impact my faith and life from being the Director of Events and Conferences. #bishoplong #eddielong #RIH

“He’s no longer in pain,” Smith continues. “He’s no longer dealing with the complications that he had to deal with.”
A statement released by the church to the ajc this morning confirms Long died early Sunday morning after “a gallant private fight with an aggressive form of cancer.”

There had been much speculation about Long’s health after he posted a video last year of him looking extremely thin. He never publicly disclosed the nature of his illness.