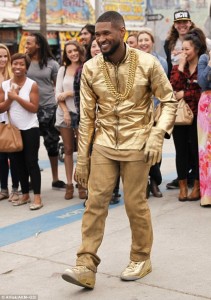 Global superstar singer, musician, and dancer Usher surprised a large crowd of spectators in Venice Beach during Monday’s video filming for MasterCard’s Priceless Surprise Campaign! The “I Don’t Mind” singer was wearing gold from head to toe including a mask and hat that he kept on during his performance.

The entire performance on the Venice Boardwalk was for the campaign in which one lucky fan was flown to Los Angeles thinking that she was participating in a documentary about Usher. Upon the full reveal, the fan enjoyed a personal performance from the legendary artist and she also received her own pair of Usher’s golden trainers.

Check out the full performance video below and post your comments on it!