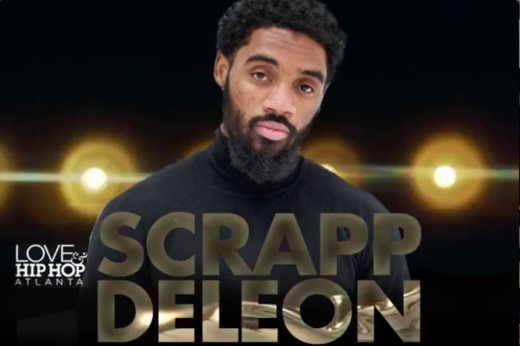 The season 5 LHH Atlanta ended showing Scrapp appearing before a judge receiving a 20 year sentence for a marajuana charge. Originally Deleon was ordered to serve 5 years in jail and 15 years probabation. Through lots of prayers and a great attorney Scrapp RETURNS to Season 8 after serving only 3 years.

Originally Scrapp won the hearts of the female audience with his bad boy image, long hair. Overall he’s considered a natural heartthrob, especially to his baby-mamma Tia who was madly in love with him. Before we knew it Scrapp found himself in a love triagle with his baby-mamma and cast member Tommy Lee (who is currently jailed without bond for showing up to court noticeably intoxicated).

Fast forward to 2019 the new trailer shows Scrapp Deleon being released from prison into a halfway house and him and ex-cast member Tommie Lee’s picture leaked and went viral when she decided to pay him a visit upon learning about his release. Now we don’t know where this relationship is headed because we also saw Moneice Slaughter from Love & Hip Hop Hollywood all cozy with Scrapp on a sofa asking if anyone knew. Since the release of that trailer Moneice and Scrapp have separately confirmed they are not dating nor in a relationship.

We will just have to get on the case and get you an update when we catch up with our friend Scrapp Deleon at his viewing party in Atlanta hosted by him and several cast members. Make sure you rsvp for this 21 & over event at the Josephine Lounge.